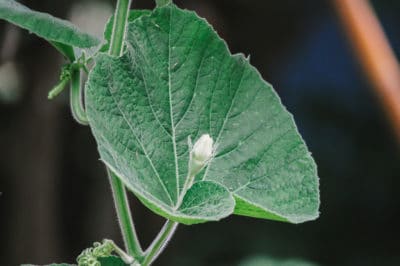 Most gardeners like to plant pumpkins. They are easy to grow, thrive in almost any soil, and all planting zones, plus produce colorful, robust fruits. Without proper care of the pumpkin vine, however, the harvest will suffer.

Pumpkin vines start out with two small, bright green leaves. It does not take long for the plant to produce bunches of leaves, which grow at a rapid rate. Within several weeks of germination, it is not uncommon to see pumpkin leaves as large as your hand.

After the leaves appear, the actual vine will start to grow out from the base of the plant. In its initial stages, the pumpkin vine is not much thicker than a pencil, although that will soon change.

How Do Pumpkin Vines Grow?

Regardless of the variety of pumpkin you plant, the vines all grow the same way. They begin to shoot out from the base of the plant and travel across the ground. The rapidly spreading vines are why spacing of pumpkin plants is so essential; plants that are too close together send out vines that quickly become tangled together.

Once the pumpkin vines are well-established, secondary vines also appear. These are the vines on which the actual pumpkin fruit grow, so it is vital to keep the secondary vines in good health.

Tip: Train the primary pumpkin vine to grow away from the central plant to avoid overgrowth.

Since the secondary vines are the fruit producers, it is essential to keep them thriving. One of the easiest ways to do this is to cut away any other shoots that begin to appear. These smaller shoots, called tertiary vines, are useful for nothing other than sapping the energy and nutrition from the secondary vines.

Some people bury the secondary vines to allow roots to form at the base of the leaf and the vine. Not only does this provide a more stable surface for your pumpkins to grow on, but it also strengthens the entire plant.

To make sure the pumpkin vines produce large, healthy fruit, pruning them is a necessary part of caring for the vine. Otherwise, the plants grow into a tangled mess and the energy needed for fruits to grow is instead used for the growth of the vines.

When pruning, cut off all of the tertiary vines. It may go against your nature to get rid of healthy parts of the plant; keep in mind that the pumpkins need the energy to grow, and without this pruning, they will not reach their maximum size. The tools you will need for pruning include:

Additionally, cut both the central and the secondary vine approximately 8-10 feet (2.5-3 meters) from the last fruit on the vine. Again, this allows the energy and nutrition to benefit the fruit directly.

Tip: Removing some pumpkins from the vine and leaving the choicest ones increases the size of the pumpkins.

Pests and Diseases to Watch For

Part of caring for the pumpkin vines includes getting rid of any pests or diseases that may damage them.

The pumpkin beetle and the vine borer are common pests that can damage or obliterate your entire crop. The best way to control either of these pests is to use an organic insecticidal soap and pick the bugs off the vines as they appear.

The two most common diseases pumpkin vines are susceptible to are powdery mildew and bacterial wilt. Without proper treatment, both these diseases can kill the entire plant, and will also spread. Using an organic antifungal spray can prevent the disease.

Tip: Digging up diseased vines is the only way to control the spread of a disease. Do not compost the vines, as the disease will spread through the compost pile. Burning is preferable.

Caring for Pumpkin Vines is Worth the Effort

Although it may seem like caring for pumpkin vines is a lot of work, the reality is that the steps you have to take to keep them strong and healthy are not any more complicated than the care you give any other plant in the garden.

Additionally, the end results are worth the effort. You will have monstrous pumpkins with vibrant colors that will be the envy of everyone.