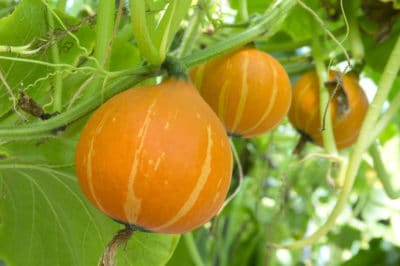 How Many Pumpkins Will My Plant Produce?

After you have planted your pumpkins and watched them grow from seedlings to large plants, it is natural to start to wonder just how many pumpkins you are going to be able to harvest.

What Variety of Pumpkin Did You Plant?

Getting an idea of how many pumpkins you will get from each crop largely depends on the variety of pumpkin you plant. For example, large pumpkins like the Jack O’Lantern type cannot be expected to produce as many pumpkins as a smaller type such as the Sugar Pie pumpkin.

However, pumpkin plants will produce nearly as many fruits as you will allow them to. Since this is not always a good thing, there are steps you can take to limit the number of pumpkins per plant.

Why Limit the Pumpkin Production?

It is important to realize that pumpkin vines require a lot of energy to grow. This energy comes from sunlight and food in the form of fertilizer, and water. The more pumpkins you allow each plant to produce, the more food and water it needs.

By limiting the number of pumpkins to 3-4 per plant, you can ensure that each pumpkin has all the nutrition it needs rather than forcing it to share with many pumpkins. In turn, this increases the size of each fruit at harvest.

How To Limit Production

There are several different ways to limit how many pumpkins each plant will produce.

Tip: When pruning or cutting vines, be sure to wear heavy gloves. The vines are spiny and can hurt.

Deciding How Many Pumpkins to Keep

Deciding how many pumpkins to keep is purely personal. Since some varieties of pumpkins like Sugar Pie pumpkins do not grow to be very big, leaving 8-10 pumpkins per plant is acceptable. Miniature Baby Boos are smaller yet, so you can keep as many on the plant as you wish.

However, if you plan on growing any of the larger-sized pumpkins, 3-4 pumpkins per plant is optimal. If you are growing a Giant pumpkin, leave only one pumpkin per plant. In this way, you can be sure all of the nutrients are going directly to the pumpkin so it can reach the weight you hope it will.

The most crucial thing to remember when deciding how many pumpkins to leave on each plant is that nutrition spread between 10 pumpkins is not nearly as effective as nutrition feeding only three or four. With this in mind, take note of the harvest you hope to have and prune the vines accordingly.