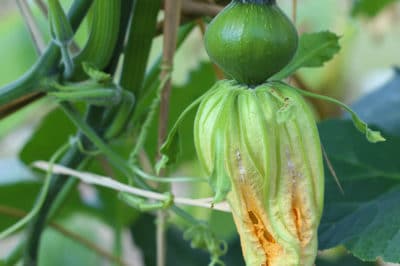 From Seed to Harvest: The Growth Stages of a Pumpkin

One of the most exciting things about planting pumpkins is watching them all through the different stages of development. There is little as satisfying as planting a seed, knowing it will eventually provide food for you.

It Starts With a Seed

Like most plants, pumpkins start out as nothing more than a seed. Roughly triangular, the pale yellow seed contains everything needed to grow a mature plant.

Once you plant the seeds in warm, moist soil, you only have to wait approximately a week for the first two leaves to appear.

From Seed to Sprout

Once germination has occurred, two small green leaves will break through the earth. These two leaves are not actually “true” leaves, but are instead known as the sprout.

Many people actually grow these pumpkin sprouts to eat, especially during the winter months when fresh greens are not readily available. These small plants will eventually turn into pumpkin plants.

About a week after the sprout has emerged from the ground, you will see the first leaves appear. You can differentiate between true leaves and sprouts by paying attention to the following:

Within a few more weeks, the leaves will continue to develop. Once these three leaves form, the rest of the plant begins to proliferate.

Formation and Growth of Pumpkin Vines

Once the leaves are established, you can almost see the pumpkin plant begin to grow. Almost daily, you can see the vines grow longer and spread out away from the base of the plant. Under the right weather and water conditions, pumpkin vines can increase by as much as six inches (15 centimeters) each day!

Next Comes the Flowers

Midway through the growing season, the pumpkin vines will suddenly be covered with bright yellow flowers. The first flowers to bloom are the male flowers. They stand erect and have a stamen in the center that is covered with pollen.

The female pumpkin flowers appear about ten days after the male blossoms.

Tip: Be sure to leave male flowers on the vines until after the females have closed up. Pollination cannot occur without both male and female flowers.

Once the female blossoms have closed, you will see small green fruits appear at the base of the flower. These little orbs are infant pumpkins, so when you see them, you can be sure pollination was successful.

Over the next weeks, the baby pumpkins increase in size. Within a few weeks, you can definitely tell it is a pumpkin, albeit a green one!

The Last Few Weeks of the Growing Season

The last few weeks of the pumpkin growth stage, the green fruits reach their final size and begin to turn their trademark orange color. Be sure to turn the pumpkins occasionally so the sun can reach all sides; otherwise, you will end up with green streaks on the pumpkin!

Tip: Keep in mind that not all pumpkins types are orange. The color depends on the variety you planted.

At the end of the pumpkin growing seasons, the pumpkin vines will begin to turn brown and wither. At this time, you can harvest the pumpkins and enjoy the final stage of their growth-eating them!