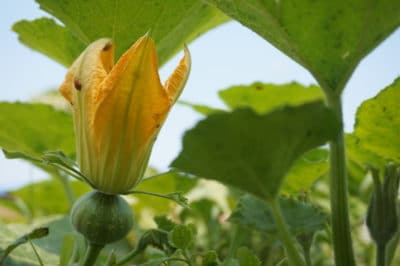 If you have planted pumpkins in your garden for the first time, the appearance of flowers may take you by surprise. However, like most plants, pumpkins need male and female flowers to pollinate.

When Do Pumpkin Flowers Appear?

About 8-10 weeks after planting your pumpkin seeds, you should see yellow flowers begin to appear on the vines. Within a few days of their first appearance, the flowers fully open. They are star-shaped flowers with five distinct points.

The first set of blooms on the vine are always the male flowers, and there are usually a large number of them. Do not be alarmed when they open one morning and are gone the next! New male flowers will bloom just in time to pollinate the female flowers.

If you are paying close attention to your pumpkin plants, you will notice a proliferation of male flowers and no females. This is normal; the female flowers start to bloom approximately two weeks after the males.

Once the female pumpkin flowers bloom, you should be able to see a distinct difference in the two of them. The males have a little stamen in the center of the flower that sticks straight up and is covered with pollen. The female flower, on the other hand, has a small group of stamens called a stigma.

The female pumpkin flowers also grow close to the vine and have a small pea-sized ball directly under it, between the vine and the flower. This small nodule will eventually be a pumpkin.

Female pumpkin flowers are usually pollinated by bees carrying pollen from the male flower to the female flower. However, if you want to be sure of a successful harvest you may choose to pollinate the flowers by hand.

The tools you will need for hand-pollinating are simple ones you should already have:

Tip: The magnifying glass is not a necessity; instead, it just makes it easier to see what you are doing.

To hand pollinate, gently brush the cotton swab over the male stamen and collect pollen on it. Then, transfer the pollen to the stigma of the female flower.

Once you have pollinated the female pumpkin flower, it will close up and disappear. If pollination has been successful, the green pea-sized ball at the base of the flower will begin to grow rapidly. Within a few days, it will be exponentially bigger and undeniably a healthy pumpkin fruit. In this way, whether you hand-pollinate or allow nature to have her way, you can tell if pollination has occurred.

If pollination has been successful and the female pumpkin flowers grow fruit, you can almost guarantee a plentiful pumpkin harvest.