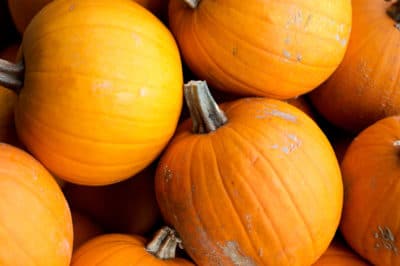 Harvesting pumpkins is the tangible benefit of having tended them all summer long. It is easy to end up with more pumpkins than you can use right away. Knowing how to store pumpkins will allow you to enjoy the harvest long after winter hits.

Even after the pumpkin vines have died off, it is possible to leave the extra pumpkins in the field for several weeks. However, a hard frost can easily damage any pumpkins left in the field, so pay particular attention to the weather forecast. If you cannot take all of the pumpkins to a sheltered place, take pains to cover them.

Tip: A hard frost is defined as four or more hours of temperatures lower than 28°F (-2°C).

As long as the temperature does not stay freezing for days on end, you can keep your pumpkins outdoors. This is important if you still have pumpkins that are green. Place the pumpkins in a sheltered area where the sun can warm them during the day. Then, cover them at night. Doing so allows them to continue to ripen for several weeks.

Tip: It is not possible to store pumpkins outdoors long-term unless the temperature never gets below 28°(-2°C).

Having a root cellar is extremely helpful if you plan on storing your pumpkin harvest over the winter. If you do not have a root cellar, a basement or dark closet will also work. As long as you can maintain a consistent temperature of 50-55°F (10-13°C), it is possible to keep them for as long as six months.

Overwintering pumpkins does require some planning. If you have a designated root cellar, it can be as simple as placing the pumpkins on the shelves. If you have a barn and choose to overwinter in it, you can layer the pumpkins in straw and cover the piles with additional straw.

Regardless of where you store the pumpkins, however, there are several things you must do before saving them for any length of time.

Tip: Periodically check each pumpkin for softening or spoilage. Rot and mold will spread quickly to the other pumpkins.

Other Ways to Store Pumpkin

If you do not have access to a root cellar to store the pumpkins, there are different ways to make your harvest last longer. While traditionally preserving pumpkin in jars is not recommended, it is easy to cook the pumpkin and freeze in chunks for later use.

Dried pumpkin is also delicious with the addition of honey and cinnamon to taste. Just cook and puree the pumpkin, add the seasonings, and dry in your oven or dehydrator. You can also slice the pumpkin thinly and sprinkle with cinnamon or pumpkin pie spice before dehydrating. You can safely store dried fruit can in the freezer or pantry for as long as a year.

Just remember, just because the pumpkins are off the vine does not mean the harvest is over. With proper care and planning, you can enjoy your pumpkin long after the vines are dead and gone.