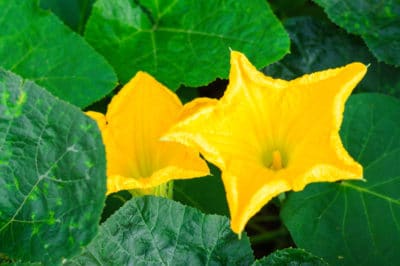 Part of the beauty of a pumpkin plant is the vibrant green of the leaves and the burgeoning young fruit. However, even more spectacular is the bright yellow pumpkin blossom that appears midway through the growing season.

Why Does a Pumpkin Plant Produce Flowers?

Pumpkin plants are similar to most other plants in nature in that they require pollination to produce fruit. Also like other plants (and humans), they need both a male and a female to reproduce. All varieties of pumpkins produce male and female pumpkin flowers to propagate the fruits.

The male pumpkin flower is a bright yellow color that looks like a star. These flowers grow on a single stem that rises straight up from the vine. If you look inside the flower, you will see a small stem called the stamen. The stamen will be covered with bright yellow pollen. The pollen is necessary to propagate the pumpkin fruits.

The female blossom looks similar to the male pumpkin flower on the outside. The inside, however, appears different than the male. Instead of a single stamen, the female blossom will have a multi-lobed yellow center called the stigma. The female pumpkin flower does not grow as tall and will also have what appears to be a small lump at the base of it. If pollination occurs, this bump will develop into a pumpkin.

When Do Pumpkin Blossoms Appear?

Tip: Male flowers outnumber the female blossoms by far, so do not be concerned if it seems like you do not have enough female pumpkin blossoms.

Like most plants, pumpkins need a pollinator to reproduce. In nature, pollination occurs via insects, typically bees. Be sure to plant bee-friendly plants in and around your garden to attract them, and you should have no problem with lack of pollination.

Some plants that bees are attracted to include:

If you have not noticed bees hovering around your garden or if you are raising a type of pumpkin that you want to guarantee grows, you can also pollinate your plants by hand. While this sounds like a task for an expert, the process is simple.

The only tools needed for hand pollination are cotton swabs and garden gloves to handle the prickly pumpkin vines. Softly brush the cotton swab over the male stamen to gather pollen, then lightly brush the female stigma to transfer pollen.

Tip: You can tell if pollination has occurred, either naturally or by hand, if the female flower closes up and a small green globe occurs at the base. If so, the orb is what will turn into a pumpkin!

Other Uses for Pumpkin Flowers

There are usually far more pumpkin blossoms than necessary for a plentiful harvest. Instead of letting them just die on the vine, you can pluck them and eat them! An excellent source of vitamin C, folate, and other nutrients, pumpkin blossoms are delicious in salads or when stuffed with cheese and spinach.

Since pumpkins can grow anywhere, from a large garden plot to a smaller patio container, you can enjoy the many benefits of planting pumpkins regardless of where you live. Since almost every part of the pumpkin plant, including the blossoms, is edible, this is one plant whose benefits outweigh the work you put into them.