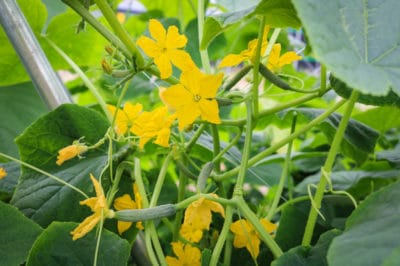 The good news is that your cucumber vines are simply exploding with flowers. The bad news is that, unless bees and other insects pollinate the female blooms, you won't harvest a single cuke. When Mother Nature fails, it’s time for you to step in and pollinate them by hand. We’re here with the answers to some common questions about the pollination process.

How Do I Tell Male Cuke Flowers from Females?

On cucumber vines, the male flowers begin appearing up to two weeks before the first females. They have thin. long stems extending out from the vines and pointy, pollen-laden stamens in their centers. The females have miniature baby cucumbers nestled between their short stems and petals.

When Are Female Cuke Flowers Ready for Pollination?

A female flower’s central stigma is ready to receive pollen as soon as the flower opens. The pollen is ready to fertilize the stigma if it easily rubs off the stamen onto your finger.

The process is a simple one, with only a soft-bristle artist’s brush needed to do the job. Timing, however, is critical:

How Will I Know if the Pollination Was Successful?

You won’t know until a few days later, when the female flower falls off and you see that the baby cuke beneath has grown. If it’s starting to shrivel instead, the pollination didn’t take.

Expert gardener’s tip: Make sure to pollinate all of a stigma’s segments. Otherwise, the fruit may grow but it won’t get as large as it should.

What If I Don’t Have Time for Hand Pollination?

If insects aren’t getting the job done and hand pollination isn’t an option for you, consider planting self-pollinating (parthenocarpic) cucumber cultivars. A popular choice is ‘Arkansas Little Leaf.’ Suitable for container growing, it produces 4-inch cucumbers perfect for pickling and slicing.