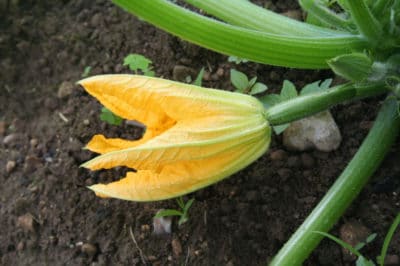 Pollinating zucchini by hand is ideal if you want to use row covers, save seeds, or harvest blossoms themselves. The first step is identifying female flowers, as they're the ones which will eventually produce fruit.

Zucchini plants produce two types of flowers. Female blossoms are somewhat smaller; at the base, you’ll see what looks like a miniature zucchini. If the flower is pollinated, this will develop into a full-sized zucchini. Within the petals, female flowers have a multi-stemmed stigma, which does not produce pollen. Male flowers have a single pollen-covered stamen.

Though each plant produces both male and female flowers, they’re typically located on different parts of the plant. Male flowers are far more plentiful and are usually found on the ends of vines, further from the base of the plant. The female flowers tend to cluster nearer to the roots, often hidden beneath the leaves.

How do I hand-pollinate my zucchini?

Pollinating zucchini is easy. Start early in the day, just after the flowers open. Use a cotton swab to collect pollen from male flowers and apply it to the stigma of female flowers. If you grow other types of zucchini or other squash and want to be sure your female flowers aren’t cross-pollinated, pollinate each by hand and remove any remaining male flowers.

Zucchini are typically prolific producers if left to their own devices, so why bother identifying female flowers and pollinating by hand? It’s a necessary step if you want to collect seeds, since zucchini can cross-pollinate with a number of other squash. Though the fruit produced from cross-pollination are fine, the seeds inside might grow into hybrids with unexpected characteristics.

Another good reason to hand pollinate is to protect your zucchini from insect pests. Row cover is a great defense against bugs, but of course it also keeps out the pollinators your plants need to set fruit. Hand-pollinating lets you keep the bugs away and still grow a bumper crop of squash.

If you opt to remove male flowers, or even some of the female flowers, there’s no need to toss them straight on the compost heap. They’re perfectly edible, and are even considered a delicacy. Some people opt to remove the stamens or stigma, but it’s a matter of personal preference. Try zucchini blossoms:

Flowers are best eaten shortly after they’re picked. Rinse them clean with cool water after harvesting, pat them dry, and store them in the fridge until you’re ready to use them.