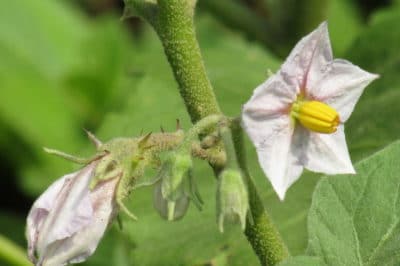 Why Are My Eggplant Flowers Dropping?

One of the interesting things about the nightshade, eggplant flower is that it's self-pollinating with both male and female parts. All eggplants grow from the female part of the flower. If there are problems with the eggplant flowers, your eggplants won't bear fruit.

Anatomy of an Eggplant Flower

Eggplant flowers grow in clusters of two or more or as solitary flowers that are about 2-inches wide. When solitary flowers grow, there is less chance of flower drop. Flowers growing in clusters can drop as many as 80% of their blooms. The flowers open in the morning, and begin closing mid-afternoon until the next morning for about three days, then stay partially opened during these times.

Eggplant flowers are made up of the following parts:

Although eggplant flowers are self-pollinating, bumblebees and other insects also pollinate the flowers. In fact, a study conducted in Turkey in 1995 discovered that eggplants pollinated by bumblebees produced 23% more fruit than self-pollinated plants. Other insects that pollinate eggplants are ants, thrips and flies. There was no difference in the fruit quality, no matter which way the pollination took place.
When eggplant flowers self-pollinate, it’s usually caused by vibrations produced by the wind, rain or shaking the plant by hand.

Eggplant flower drop is one of the main problems that face gardeners. Your eggplant flowers drop off the plant if they’re not getting enough water, or pollination hasn’t occurred.

Insufficient water results in dried flowers that drop. You can prevent this by watering your eggplants at least once per week with a good soaking that reaches 6 inches into the soil. This also helps the roots of your eggplants to grow deeper into the soil where it stays moist.

The other factor that causes flower drop is lack of pollination. During dry, hot weather, pollen becomes inactive, so pollination doesn’t take place, and the flower falls. If you think this is the problem with your flowers, you can help pollination along by gently shaking each plant, transferring the pollen from the male to female parts of the flower.