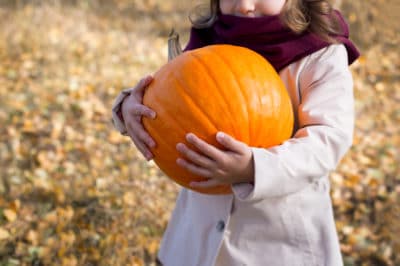 How to Know When It Is Time to Pick Pumpkins

Once you have nurtured your pumpkin plants all through the season, they begin to reach their full size and turn color. At this point, the question of when to harvest the pumpkin crop arises.

When Do Pumpkins Turn Color?

Just because your pumpkins have begun to turn color does not mean that it is time to head out to the field to start to pick them. The truth is, they pumpkins will start to turn orange several weeks before they are ready to be harvested.

Tip: If your pumpkins are slow to change color in spots, gently turn the pumpkin so the sun can ripen the fruit further.

Are Orange Pumpkins Ready to Pick?

Even pumpkins that have reached maturity and have their final pigmentation are not necessarily ready to be harvested. Additional signs to look for, in all varieties of pumpkins, include the following:

Once you have observed all of the above signs, your pumpkins are ready to pick.

How to Pick Pumpkins

The best way to harvest pumpkins is to arm yourself with heavy gloves and a sharp knife or shears. Gently grab the stem of the pumpkin with one hand and cut through it with the other. Be careful to leave the stem attached to the pumpkin. If it falls off, the pumpkin will spoil quickly.

Also, keep in mind that you do not have to harvest all of your pumpkins at the same time. Even after they have fallen off of the vine, you can leave them in the field until the first hard frost. Since pumpkins are not cold tolerant, if a substantial frost is in the forecast it is best to pick them all.

What to Do With Pumpkins After Harvest?

Whether you leave pumpkins in the field until frost or choose to store them indoors, you can easily have pumpkins to eat until well after they have ripened. Simply wash and save them in a cool, dry area and you can have pumpkin all through the cold winter months.