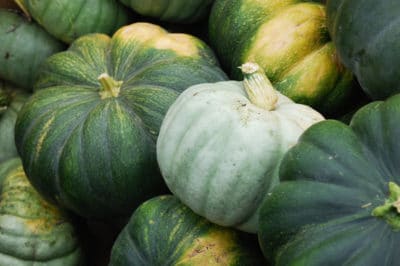 Green Pumpkins Are a Hidden Jewel

Most people hear the word pumpkin and automatically think about the bright orange pumpkins used for carving or pies. However, there are many other colors of pumpkins, including green ones!

What Are Green Pumpkins?

There are two categories of green pumpkins. One includes traditional orange pumpkins that have not yet matured; the other contains pumpkins that are green even when they are mature.

Regardless of the variety of pumpkin you plant, all pumpkins start their lives as small green globes. As they grow, they become larger until they reach maturity. All through this process, the pumpkin fruit remains green. Only when the pumpkin harvest is imminent do the green pumpkins turn orange.

Tip: To hasten the ripening of green pumpkins, turn them gently so that all sides are exposed to the sun.

If a hard frost is forecast, harvest all of your pumpkins so you can save the harvest. Immature green pumpkins will ripen if exposed to warm air and sunshine. Make sure to place them in a sunny area that is sheltered from the wind. Alternately, you can put them indoors in a bright spot.

Some varieties of pumpkins are naturally green even when you harvest them. Few of these pumpkins are a pure green but are instead different shades of green or green with other colors like orange or yellow. However, they all fall into the category of green pumpkins. Some of the various types include:

Tip: Did you know that some well-known “squash” varieties are actually pumpkins? Some of these include the green striped cushaw and the Pennsylvania Dutch Crookneck.

Contrary to popular belief, any pumpkin you can grow is edible. This includes unripened orange pumpkins that are still green or green-tinged. However, the taste will not be as rich as you are accustomed to, and a green pumpkin may not cook up as well as a fully-ripened one.

Tip: There are some recipes, typically Asian ones, that do call for an immature pumpkin.

One solution is to leave the pumpkins in the field as long as you can, even if the vines are dead and the pumpkins have come loose from them. As long as the weather does not get below 25°F (-4°C) for more than 4 hours, the pumpkins will continue to ripen. You can also cover the pumpkins if a hard frost is forecast, then uncover them during the day. This allows the pumpkin to mature naturally.

Tip: Although pumpkins ripened indoors will turn orange, their taste and texture will not be the same as those allowed to ripen outdoors naturally.

When speaking of naturally green pumpkins as opposed to immature orange pumpkins, you might think that preparing them requires different methods. However, you can cook and eat a green pumpkin the same way you do an orange one. In fact, the flesh of a green-rinded pumpkin is typically a shade of orange!

Keep in mind that with a green variety of pumpkin, you may be unsure when to harvest them because the rind is always green or some variation of green. To be sure they are ripe, use your fingernail to press against the skin. If it dents or scratches easily, it is not quite ready to harvest. Look for the telltale signs that harvest is close by observing the vines for browning and shriveling; when this happens, the harvest is near.

Green Pumpkins Are a Treat

Regardless of whether you have purposely planted a green variety of pumpkin or you have inadvertently harvested an immature orange fruit, you can be sure that the fruit will not go to waste. Look for a recipe calling for green pumpkin or cook it like you would an orange one; you will not regret it.