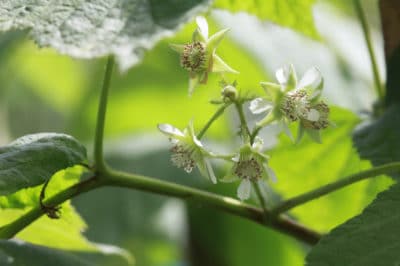 When Do Raspberries Bloom?

The appearance of flowers on raspberry bushes signals the soon arrival of berries. Some raspberry varieties will not develop flowers until over one year after canes are planted: other varieties will develop flowers in the fall of the first year. The good news is that from the second year forward, flowers should develop and produce sweet raspberries for many years.

In the spring, raspberry canes will multiply and grow 6 feet or more tall. Compound leaves containing three or more toothed leaflets grow on the canes. Clusters of flowers bloom among the leaves in late spring to early summer. Other interesting facts to know about raspberry flowers are:

Spring planted bare-root canes will quickly grow multiple tall canes covered with leaves, but will not develop flowers the first season. No flowers mean no raspberries during the first summer. The leaves will die and fall off the canes. The first year canes (primocanes) will overwinter and new canes will emerge among them in the spring.

The previous year’s primocanes become floricanes that are capable of producing flowers and fruit. Among the leaf covered floricanes, flowers appear, followed by berry formation. Summer-bearing raspberry picking season is midsummer to late summer depending on the location, weather, and growing conditions.

The fruiting cycle of everbearing (fall-bearing or primocane-bearing) raspberries is different than summer-bearing raspberry varieties. During the first summer of growth, flowers will appear only on the primocanes tips. Expect flowers to form in July for most locations. The first year’s crop will be small.

During the second summer of growth, flowers will form early on the lower portions of the canes that fruited the previous year. These primocanes are now called floricanes. Berries for a summer harvest will form on these flowers. These canes will die when the fruit production is finished.