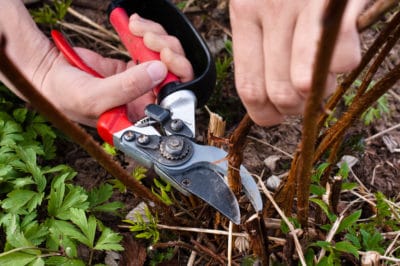 Raspberry Pruning is a Necessity

Raspberry bushes can spread far from their original hedgerows or hills. New canes grow every year: old canes die. A bountiful raspberry harvest is dependent on proper pruning of the old canes. Knowledge of the raspberry growth cycle is necessary before pruning should be started. Learning how to prune the different types of raspberries is crucial also.

If unpruned, raspberry canes become overcrowded which leads to insufficient sunlight and air circulation to the bush’s lower section. Fungal diseases can develop under these conditions, sometimes leading to the death of the bush. Another reason for pruning is that picking is easier

Raspberry bushes are both perennial and biennial. The perennial roots and crown live for possibly years, but the canes are biennial (live for two years).

Primocanes are called floricanes in their second year. Summer-bearing raspberry varieties will flower and produce fruit now. Everbearing buds will produce much more fruit this season than last season.

The proper time to prune raspberry bushes is anytime after they go dormant. Depending on the location, it usually occurs from November to March. Tip pruning of black and purple raspberries can also be done through the summer.

Floricanes and primocanes are the two basic types of raspberry canes. When determining which canes need to be pruned, these are some cane factors to consider:

These canes have gray peeling bark and lateral branches. When cut into, there is nothing but brown tissue. These canes are dead. All of these canes should be cut out and destroyed.

Weak spindly canes will not produce very good fruit. Most of these are too short to reach the trellis wires. Prune and then dispose of these.

Fruiting canes are easily recognized. The thick cane is green under its bark and has buds. Fruiting canes with good height should not be pruned. Berries will develop from these canes.

When pruning, there are some goals that need to be accomplished. Here are some:

The different types of raspberries have different pruning steps. Follow these steps for larger yields of high-quality berries.

In late summer or fall, remove dead floricanes. While dormant, all weak, diseased, insect-damaged, and broken canes should be removed. Narrow the row to 18 to 24 inches wide if using the hedgerow system. Shorten the canes to 5 to 6 feet tall. Attach the canes to the trellis with cotton string.

When pruning canes growing in a hill, leave all healthy primocanes in each hill. Shorten the canes to 5 to 6 feet tall and attach the canes to the trellis wire with cotton string. Do not begin pruning summer-bearing red raspberry bushes until the second year.

After harvesting the early summer crop, remove the old floricanes to make room for the primocanes that grew beside them all summer long. Second crop fruit grows on the tips of primocanes.

When plants become dormant, prune damaged or weak canes plus the previously fruited tip portions of the canes. All summer-bearing raspberry bush hedgerows should be narrowed to 18 to 24 inches wide when pruned.

Some gardeners grow only a fall crop of everbearing raspberries. This is the best method in cold regions. In early spring, cut all canes to ground level. After the new canes start to grow, maintain an 18 to 24-inch wide row.

During late spring or early summer, prune the top 3 to 4 inches of the primocanes. The height of these pruned primocanes should be about 3 feet. As the bush grows in the summer, it is safe to further prune the primocanes that grow taller. Tip pruning will encourage lateral branches which results in more fruit.