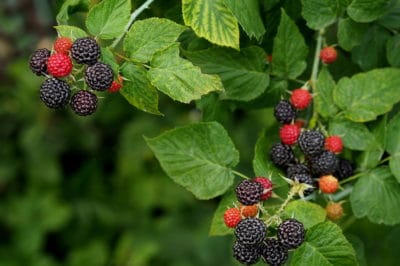 Black raspberries are a valuable crop that is difficult or impossible to find in markets. If you do locate some, the price of the fruit is usually high due to its high perishability. What a great reason to grow your own! Growing this distinctively flavored berry in a garden or edible landscape is a rewarding endeavor.

The deciduous black raspberry bush grows branched canes usually 4-6 feet tall in the first year after planting. Erect canes eventually arch sideways and downward. If not trellised, their tips may reach the ground.

Unlike most raspberries, black raspberries do not propagate by runners. New primocanes develop on crown buds at the base of the floricanes (two-year-old canes). The base is sometimes called a clump or a hill. Clumps or hills remain at the same position for the life of the bush, producing new primocanes year after year.

Black raspberries have the same basic needs of other raspberry varieties. The black raspberry planting site should receive at least four to five hours of direct sunlight per day. Some partial shade in hotter climates is beneficial. The soil should be fertile and well-drained.

Planting one plant is possible because black raspberry bushes are self-pollinating. Black raspberries are the perfect fruit to grow in an edible landscape. Both winter and summer these bushes are beautiful and do not grow more than 4 feet tall if they are pruned correctly. They do not sprawl out by runners so taming them is easy.

Most gardeners want to plant more than one plant. If planting in a traditional hedgerow, space black raspberry plants 3 feet apart. Rows should be about 9 feet apart.