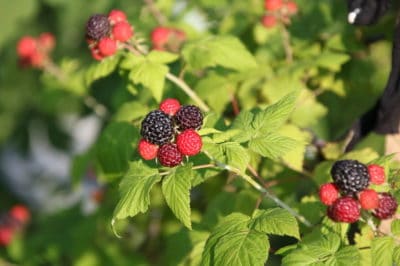 Black raspberry bushes do not spread as far away from the original planting as other raspberry varieties. Without runners, their sprawling ability is limited; however, black raspberry bushes still require proper pruning. The simple task takes about an hour to complete in an average home raspberry patch. The ultimate benefit of pruning arrives at harvest when you bite into the uniquely flavored black raspberry.

All experienced raspberry growers know that if they want an abundant harvest, they must prune the bushes. The details of black raspberry bush pruning are somewhat different than other varieties, but the benefits are the same. The benefits of pruning raspberry bushes are these:

The timing of pruning is important. If done at the wrong time, it may eliminate the production of fruit that season. Knowing the black raspberry growing cycle before pruning is crucial to understanding all the aspects of pruning.

Only lush vegetation grows on the canes the first year of growth. No pruning is needed.

The purpose of summer pruning of black raspberry bushes is to make picking easier and to increase production. When the primocanes reach 24 inches tall, pinch out 2-3 inches of the tip of each primocane. Doing this will encourage lateral branching which results in more fruit. Soon after harvest, cut at ground level all fruit-bearing canes, then destroy them.

Dormant or early spring pruning is done when the canes begin to bud, but before leaves begin to appear. Pruning after the leaves appear could stunt the growth of the bush. Here are the simple steps of dormant pruning of black raspberry bushes:

The proper clothing and tools while pruning make the job more pleasant. Protect yourself from the prickly canes and branches of the black raspberry bush by wearing a long-sleeved shirt. Use sharp pruning shears for making the necessary pruning cuts. Remember to disinfect the shears before and after use to prevent the spread of disease.