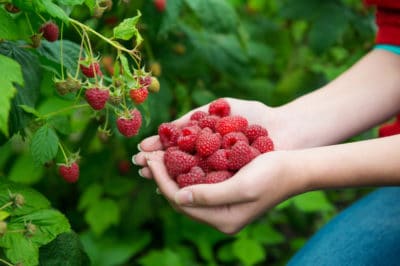 Tart, sweet flavored summer-bearing raspberries are a mid-summer treat that can be successfully grown in home gardens. If an everbearing variety is grown, fresh berries can be enjoyed into the fall. Four bushes per person should produce enough berries for fresh eating and some preserving. Plant a summer-bearing and an everbearing variety if a longer raspberry season is desired.

A raspberry patch will yield its sweet treat about the same time each year, although there can be fluctuations due to weather conditions. Harvest time also varies depending on the type and variety that is grown.

Summer-bearing raspberry season lasts for about one month. In the United States, picking season typically peaks in June in the South and in July in the North. This type of raspberry will not produce fruit until the second year.

Everbearing (fall-bearing) raspberries will produce a small crop in the fall of its first year. A much larger crop will be ready for picking around August the following year. This type of raspberry typically produces fruit until frost.

Taste and Texture of Ripe Raspberries

A perfectly ripe raspberry is juicy, sweet, and tart. The taste will slightly vary depending on the variety that is grown.

Second to eating raspberries, picking this delicious fruit is the best part of growing them. Knowing how to properly pick this delicate fruit will yield more edible fruit. Here are some guidelines to follow when picking raspberries:

Get the most nutrition from raspberries by eating them very soon after picking them. In the refrigerator, they only last for a few days. Consider freezing, canning, or dehydrating them if you have an abundant harvest that can’t be consumed quickly.