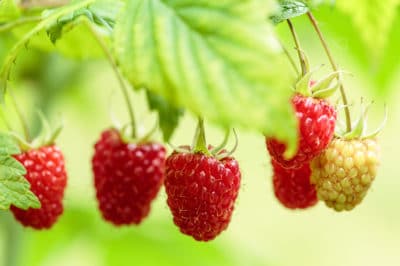 All raspberry bushes begin with the planting of one bare-root cane in the spring. That one cane multiplies into many leaf covered canes that will eventually bear delicious raspberries. Everbearing raspberries will bear a small amount of fruit in the fall of the first year, but summer-bearing raspberries will not bear fruit until summer in the second year of growth.

Much patience is required when growing summer-bearing raspberries because the harvest is delayed until the second summer of growth. In the year of waiting, bare-root canes produce more canes from underground lateral stems and buds. The canes will produce leaves, overwinter, and bear fruit the following summer.

The list above is just a sampling of the different varieties available. With smart planning, maximum harvest time can be achieved. Prepare to start picking raspberries in June in the warmer climates and July in the cooler climates.

Everbearing varieties are capable of producing two crops every season. In late summer or early fall, the tips of the canes that grow throughout summer will produce the largest crop. A second crop in the late fall is possible if the bush is pruned like summer-bearing raspberries.