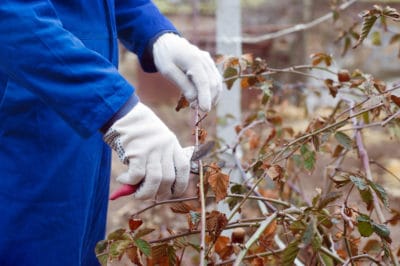 Pruning Blackberries for a Bumper Crop

Pruning your blackberries may sound like just one more chore in the never-ending battle to keep your garden tidy. But pruning accomplishes much more than that. First, it keeps blackberry canes strong. Second, it encourages the growth of lateral branches where your next crop of berries will develop. Finally, it limits the spread of cane-borne diseases. To prune your blackberries without feeling intimidated, read on!

To know the best time to prune blackberries, you first have to understand the differences between their canes:

As perennials in USDA hardiness zones 4 through 9, blackberry bushes live many years. Their individual canes, however, live just two. Called primocanes in their first year, they spend their days manufacturing and storing the energy necessary for flowering and fruiting in their second.

Primocanes that make it through the winter graduate to become floricanes. They bloom in spring, fruit between early and mid-summer and die. Nearly all blackberry cultivars fruit only on their floricanes.

But a handful, including ‘Prime-Ark 45’ and ‘Prime-Ark Freedom,’ do things differently. In fall, flowers bloom and berries ripen at their primocanes’ tips. Given the chance, the same canes bloom and fruit lower down the following summer. Because of this encore performance, these cultivars are known as “everbearing.”

When and How to Prune the Different Canes

Of course, caring for your blackberries also requires prompt pruning of damaged or diseased canes and leaves.

A well-sharpened pair of pruning shears handles most blackberry canes. To protect against thorns, wear sturdy, forearm-length gloves, fheavy long pants and a long-sleeved shirt or jacket. Protective eyewear may also be advisable, depending on the height of your blackberry bushes.

When pruning diseased canes or leaves, disinfect your tools in rubbing alcohol between cuts and after finishing.