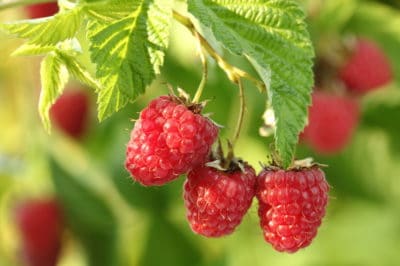 How to Grow Sweet Raspberries

Homegrown raspberries are far more superior in taste than store bought raspberries. Eating raspberries is a delicious way to add antioxidants, vital vitamins and minerals, and fiber to your diet. This easy-to-grow perennial will provide a bountiful supply of delicious fruit that will continue to produce year after year. The proper raspberry type, a good trellis, and husbandry techniques are key to a successful crop.

Where Can Raspberries Be Grown?

Raspberries tend to prefer the cooler climates of USDA Zones 4-7; although, there are varieties that can do well in more extreme weather conditions. Gardeners in USDA Zone 3 can plant the cold-tolerant varieties: southern gardeners can successfully grow everbearing (fall-bearing) varieties developed for USDA Zones 8-11.

What Are the Types of Raspberries to Plant?

How Much Sun Is Needed for Healthy Bushes?

Raspberries need four to five hours of direct sunlight every day. Filtered sunlight the remainder of the day is sufficient for healthy plant growth. Too much direct sunlight can quickly dry out the berries.

What Kind of Soil Is Best for Raspberry Bushes?

Raspberry bushes thrive in any well-drained soil with a pH of about 6. In early spring or before planting for the first time, an organic fertilizer high in nitrogen or manure should be mixed into the soil. This will supply what is needed to produce a tall healthy bush loaded with berries.

Do not plant raspberries in the same soil that recently grew tomatoes, peppers, or potatoes. These crops sometimes harbor a soil-borne fungus called verticillium wilt. The raspberry bushes can be infected by the fungi left in the soil. In addition, do not plant in soil that grew strawberries or raspberries in the previous 6 years.

How Do Raspberry Bushes Grow?

Bare-roots are planted in the soil then sprout new canes growing as tall as 7 feet. Raspberry bushes produce fast-growing underground runners. Within a year, one cane will multiply to 12 or more canes shooting upward.

When Should Raspberry Bushes Be Planted?

How to Plant Raspberry Bushes?

All beautiful, bushy raspberry plants begin with the planting of a bare-root that is bought or graciously gifted. Mail ordered bare-roots are delivered dormant and should be stored in the refrigerator until planting time. Garden center bare-roots should be purchased at the time of planting.

The bare-roots begin to show signs of life in the early spring. Sprouts begin protruding signaling it’s time to plant. Before planting, soak bare-roots in a half-strength mixture of B1 growth stimulant for an hour. Damage to the bare-root can occur if it is soaked for longer periods of time.

Planting begins by digging a hole 1-foot wide by 1-foot deep. Add aged manure or organic fertilizer. Place one bare-root in the center of the hole and pull soil around the bare-root. Keep the crown of the root 1-2 inches above the ground. Water well and cover with straw or other mulch no deeper than 3 inches.

How Much Water is Necessary for Raspberry Bushes?

Raspberry bushes should be well watered but not soggy. Rainfall of 1-2 inches per week throughout the growing season is needed. If enough water doesn’t fall from the sky, a soaker hose used for one to two hours once a week should be sufficient. During dry periods more water may be necessary to prevent the fruit from drying out.

How and when to Fertilize Raspberry Bushes?

When first planted, manure and an ]organic fertilizer high in nitrogen should be mixed in surrounding soil. A side dressing of the same should be spread around the bare-root at planting time and each spring thereafter.

What is the Proper Spacing for Raspberry Bushes?

How Many Raspberry Bushes Should Be Planted?

Four bushes per person should produce a generous supply of fresh raspberries for preserving and fresh eating. If you plan on making pies, jams, and jellies, increase the number of bushes to as high as 15-20 per person.

Raspberry bushes are relatively easy to maintain, but sometimes disease will attack even when the proper maintenance is followed. Diseases that plague raspberry bushes can attack the fruit, canes, or leaves. Some of the diseases are:

Raspberry bushes do require pruning. Most raspberry bushes can be pruned anytime postharvest to early spring while still dormant. Some varieties are best pruned only in the early spring. After one year of growing, pruning should begin and then done annually. Everbearing and summer-bearing raspberries each have unique pruning methods.

What Kind of Trellis Is Needed for Raspberry Bushes?

A healthy raspberry bush will grow 6-7 feet tall and need the support of a trellis. Using a T-bar trellis is the solution to preventing the top-heavy vines from falling to the ground.

When is Harvest Time?

Exact time to harvest varies greatly depending on local weather, type of raspberry, and growing conditions. July is the usual harvest month of summer-bearing raspberries. Everbearing raspberries can start to bear fruit as early as July and extend as late as October in some areas. More information can be found with local agriculture offices.

How to Pick Raspberries?

About two weeks after appearing on the vine, raspberries will be ripe enough to pick. Careful picking is necessary for this delicate fruit. Picking a ripe raspberry will require no tugging. Raspberries are more delicate when wet, so try to pick on a sunny, dry day. Be prepared to pick the fruit every couple of days.

How to Store Raspberries?

Raspberries can also be frozen individually on a baking sheet then placed in bags for later use. Frozen raspberries can be stored in the freezer for 12-18 months.

Raspberry jams, jellies, and preserves remain edible for an even longer period of time. Because of their high sugar content, the jarred fruit may still be safe to eat 18-24 months after canning.