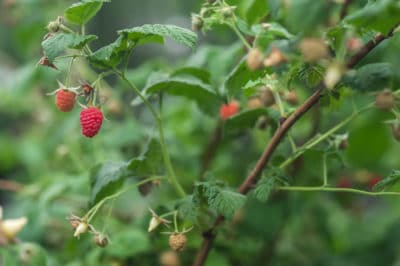 Raspberry vines, technically called canes, are the part of the raspberry plant that grows above the ground. Green vegetation followed by sweet fruit grow upon the vines. Some varieties of raspberries have vines that reach upward 7 feet: others may only grow 4 feet tall. Even when pruned, every year the vines quickly grow back to their full potential height and branch outward.

All raspberry varieties produce vines (canes) that live for two years. When two-year-old canes die, there are one-year-old canes already present to keep the plant producing.

First-year canes are called primocanes. During their first year, these canes grow tall and produce leaves on summer-bearing and everbearing types of raspberries. Only everbearing raspberry varieties produce primocanes that bear fruit.

In the second summer of growth, the primocanes that grew the previous year are called floricanes. The floricanes of summer-bearing varieties will produce raspberries from mid-summer to late summer, depending on the USDA Zone. After bearing fruit the floricanes will die. In preparation for next year’s raspberry crop, new primocanes grow among the floricanes. This process continues year after year.

Everbearing raspberry varieties have a different fruiting cycle. The primocanes (now floricanes) that fruited at the tips the previous season will produce a large crop on the bottom of these canes and then die. If everbearing varieties are pruned like summer-bearing varieties, a second crop in the fall is produced on the tips of the new primocanes.

After learning the growth cycle of the vines, it is vital to master pruning techniques. Raspberry vines prolifically grow year after year. Old dead vines must be removed to make space for the new ones. Taming the growth by pruning is important for these reasons:

The ultimate goal of pruning is a large crop of sweet raspberries. Without pruning, a jungle of tangled vines will sprawl over your lawn. Practice excellent pruning techniques and the dream of large raspberry crops should become a reality.