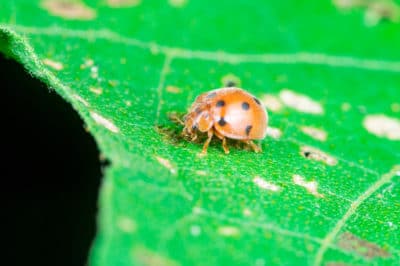 The Mexican bean beetle can defoliate bean plants and cause severe damage as well as diminished yields. Adults and larvae both feed on the plants. Controlling this pest takes considerable effort and time, especially for the organic gardener who wants to avoid toxic insecticides. Gardeners in the eastern states and portions of the Southwest are most affected.

The Mexican bean beetle is a member of the same family as the ladybird beetle (also known as the ladybug). Unlike other members of the Coccinellidae, which are carnivorous, the Mexican bean beetle confines its attention to legumes. Believed to be native to the southern plateau region of Mexico, it is actually more of a problem in states east of the Rocky Mountains than its native land.

Mexican bean beetles are similar in appearance to the related ladybird beetle. However, they are typically more yellow to copper-brown in color. Eggs are pale yellow to orange yellow and found in clusters on the underside of bean leaves. The larvae are light yellow and slightly over one-sixteenth inch long when hatched. Mature larvae are greenish yellow and about one-third of an inch long.

Both larvae and adults feed on the undersides of the leaves. As they feed, the leaves begin to take on a lacy appearance until only the veins are left. The edges of the holes turn yellow or brown. Sometimes, the beetle will also attack young pods and stems. Any kind of bean varieties may be attacked and damage is usually most severe in mid- to late summer.

Mexican bean beetles overwinter in garden debris. They emerge in late to mid-spring when the weather begins to warm. Female beetles will begin to lay eggs with a week or two after they begin to feed. Keeping your garden clean is one of the most important things you can do to control this pest. Beggarweed is thought to be a host plant and should be removed.

Organic gardeners do have options for the Mexican bean beetle. Safer’s soap sprays, if sprayed heavily on tops and bottom of leaves, may help with control. Neem oil is insecticidal and does not harm honey bees. A combined spray of Safer’s soap and neem oil may be more effective than either alone. Botanical insecticides such as pyrethrins and nicotine can be used as a last resort.