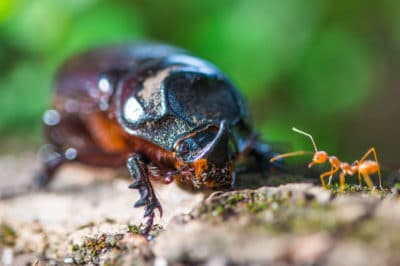 Detected in Hawaii in 2013, the coconut rhinoceros beetle (Oryctes rhinoceros) is an invasive pest native to areas of Southeast Asia. In fact, it’s one of the most destructive pests to various types of palms growing throughout the Pacific Islands and Asia. As of this writing, the beetle has only invaded the Hawaiian Islands and hasn’t made it across the ocean to the mainland U.S. Early detection and management is the best course of control to keep your coconut palms (Cocos nucifera) healthy.

Although the coconut rhinoceros beetle’s main plant of choice is the tropical coconut palm, other plants are also at risk of an attack:

An adult coconut rhinoceros beetle is relatively large, ranging just over an inch to 2.5 inches long (3.0 to 6.3 cm) and are black to dark brown. The underside of both males and female beetles, have fuzzy reddish-brown hairs and a horn used to move through tightly packed leaves. The males’ horn is usually longer than the females.

The coconut rhinoceros beetle lays its eggs in decaying matter like logs, stumps, leaf debris or other decaying vegetation. The eggs hatch in just over a week and the larvae continues feeding and growing. It takes anywhere from three to six months before they enter the pupae stage, which lasts for two to three weeks.

Adult beetles emerge from their pupae cell, fly to the crown of a palm tree and begin feeding. The beetles are only active during the nighttime hours and remain hidden in their feeding areas during the day. An adult coconut rhinoceros beetle lives anywhere from four to nine months and during a female beetle’s lifetime she can lay 50 to 100 eggs.

Coconut rhinoceros beetles bore into the center of the crown of palm trees, where they damage the newly developing growth, feeding on the sap. Signs of beetle damage include:

Since the coconut rhinoceros beetle hasn’t made it across to the U.S. mainland, make sure you declare all agricultural items you bring into the states from international travel. You don’t want the beetle hitchhiking in your items. There are traps available that contain pheromones of the male beetle that lure the beetles into them. Other management options for keeping the beetle under control include:

The eggs and pupae of the beetle have natural enemies such as other beetles, rats, pigs and ants. Predators dig through the area of decaying matter where the pupae and eggs are and consume them.