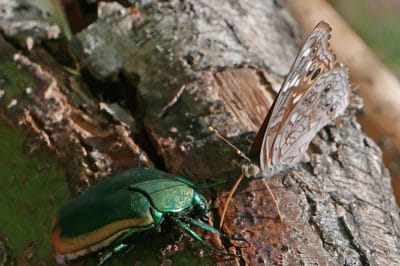 How to Control Figeater Beetle

The figeater beetle is a native of the American southwest. However, its range has expanded over the last 40 years as home gardens, compost piles and similar gardening activities have become more common. The beetle is attracted to ripening and fermenting fruits. While it doesn't usually cause major damage, it may increase the risk of rotting fruit.

The fig is a warm-climate shrub or relatively small tree that grows well in USDA Zones 9 and above, with a few varieties hardy to Zone 6. The soft-skinned fruit must ripen on the tree, where it may be more susceptible to insect attack. Figs need average soil and water and little to no fertilizer. Most varieties bear two crops a year.

Figeater beetle, or cotinis mutablis, is a member of the scarab beetle family. Also known as the green fig beetle or green fruit beetle, it belongs to a group called flower chafers. Members of the group feed primarily on pollen, nectar or petals. The beetle resembles green June beetles and Japanese beetles, for which it is sometimes mistaken.

How to Recognize Figeater Beetles

Adult figeater beetles are semi-glossy green on the top and a brilliant iridescent green underneath. Legs are also iridescent green. When mature, the beetle is about one and a quarter inches long. The beetle makes a loud buzzing sound when it flies and is able to fly without opening the hard forewings known as elytra. Adults appear in summer and early fall.

Larvae can be up to two inches long and are white with a dark head. Larvae have six legs, but the legs are small and ineffective for locomotion. Instead, the larva rolls onto its back and travels upside down by using the stiff hairs on its back to gain traction as it alternately flexes and extends its body. For this reason, the larvae are sometimes known as “crawly backs.”

In its native habitat, the adult figeater beetle includes cactus fruit and sap from desert trees in its diet. However, they may also bite into:

Although figeater beetles generally don’t do major damage, a large swarm can decimate an entire fig crop. To control the pest, turn compost often and screen to remove larvae. In orchards, chickens and wild birds will scratch up and eat the grubs. Trap adults by leaving a few overripe fruits to attract the beetles, then hand pick or drown by dropping the fruit in a container of water.