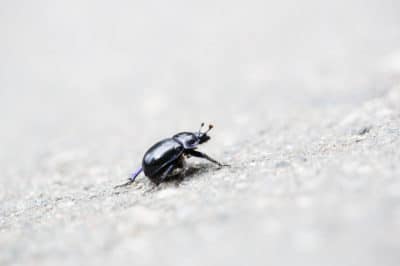 What Is an Eggplant Flea Beetle?

Eggplant flea beetles are the bane of a home gardener's life. They invade healthy eggplant foliage, leaving shotgun-like holes all over the leaves. Several organic remedies help eliminate these pests, but first you need to identify them.

What Are the Signs of Flea Beetle Damage?

When trying to identify flea beetles on your eggplant foliage, look for the following characteristics:

What Is a Flea Beetle’s Life Cycle?

Flea beetles survive the winter by living in leaves, discarded crops and woody places. In the spring, around late March when the temperature reaches 50°F (10°C), female flea beetles lay eggs in the soil, leaves and nearby roots of plants. The eggs hatch in about one week, and tiny, white larvae start eating the roots of eggplant seedlings.

How Long to Flea Beetles Feed on Eggplants?

They feed on the roots for about three weeks. You won’t notice any problem with your eggplants until the larvae grow into adult beetles. Developing from larvae to adult flea beetles takes from a week to 10 days. Once they’re adults, they begin eating the eggplant leaves for about 2 months. Flea beetles can produce three generations in one growing season, so they’re an ongoing threat.

What Type of Damage Do Flea Beetles Cause to Eggplants

Adult flea beetles feed on the underside of eggplant foliage and the eggplant stems, making tiny, shotgun holes and pits. The damage to your eggplant’s leaves causes your plants to turn yellow and stunts their growth. Young eggplants suffer from the most from flea damage, and may not recover, while adult eggplants that have four or five leaves usually survive flea beetle infestation.

Is There a Way to Control Flea Beetles?

You can do several things to minimize eggplant flea beetle infestation and damage. When your growing season is over, remove any debris, such as leaves, dead plants and woodpiles where flea beetles could live during the winter. Cut the grass and weed around your garden to help eliminate the beetles’ food sources, especially any nightshade plants.

How to Prevent Flea Beetles in the Spring

When spring arrives, delay transplanting your eggplant seedlings until they’re can tolerate any flea beetle infestations. Planting companion plants or trap crops that surround your garden prevents flea beetles from reaching your eggplants.