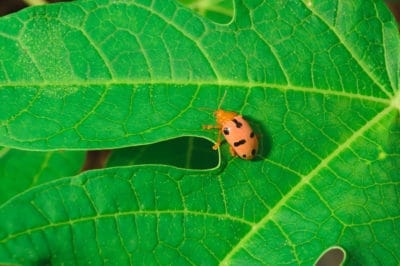 How to Control Bean Leaf Beetle

The bean leaf beetle is one of a number of beetles that attack and eat legumes. Bean leaf beetles are particularly destructive of soybeans in the Midwest. Commercial growers nearly always use insecticides, while the home gardener has a number of other options. Milder winters may promote increased numbers of the pest.

The bean leaf beetle can be found in three different forms – red, yellow or tan, and non-spotted. All of these have a triangular black mark on the wing covers just behind the “neck.” Many of these beetles also have two to four black spots present on each wing cover. They may also have a black band around the wing edges. The larvae are white with brown at each end.

Bean leaf beetles emerge in the spring when soil begins to warm. The adult beetles will eat the emerging beans and can consume the entire sprout. The following generations of beetles chew small round holes in the plant’s leaves and may also eat pod tissue. They prefer young, tender tissues and may avoid more mature leaves and pods. Larva feed on the nitrogenous nodules of the bean roots.

Although the larvae don’t generally do too much damage, adult bean beetles can skeletonize an entire plant. As they multiply and more beetles reach adulthood, the planting can be decimated. Damage is worse in warmer areas as the beetles emerge earlier and find plants on which to feed and lay eggs. In those areas, two generations are common and a third may occur if conditions are right.

Organic gardeners have several options to control bean leaf beetles. These include:

Since bean leaf beetles overwinter in plant debris, garden sanitation is one of your primary weapons in the fight to keep them under control. Remove all plant debris from the garden and burn it if you have experienced an infestation. Don’t put bean leaves or vines in compost piles. Pick up boards under which the beetles might hide in the cold seasons.

Bean leaf beetles are small – only about ¼ inch in length. You may be more likely to see feeding damage than the beetles themselves. Unless you have a major infestation, you might not even realize they’re in your garden. Check your plants between noon and 4 P.M., which is when they are most likely to be active.