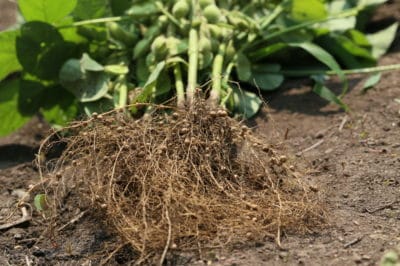 All About Bean Roots

The bean root is a bridge between the plant above the ground and the soil below. In addition to providing the plant with water and soil nutrients, bean roots anchor the plants and fix nitrogen from the soil. Some bean roots are even edible. You should be alert for bean root diseases and insect attacks that may affect the health of the entire plant.

Although many people consider beans to be shallow-rooted, that’s not really correct. The mass of the root ball varies according to variety. Pole and bush snap (green or string) beans usually have a root ball that extends about 18 to 24 inches into the ground. However, the deep feeder roots may reach 36 to 48 inches into the soil. Lima bean roots – both bush and pole varieties – can grow more than 48 inches long.

Bean plants are beneficial to the soil. Bean roots have nodules of tissue along their length. Most of the nodules are concentrated around the main root. Soil-dwelling bacteria extract nitrogen from the air and “feed” it to the bean roots, which store the nitrogen in the nodules. When you harvest bean plants, it is better to cut the plant off at ground level. This leaves the nitrogen in the ground.

In addition to their pods, some beans also produce edible roots. These include:

The larvae of bean leaf beetles will bore into the plant roots. However, root knot nematodes are the insects most likely to attack bean roots. These tiny worm-like insects live in the soil. They are most severe in sandy soils and can cause considerable damage. Nematodes also leave holes in the root tissue through which diseases can enter. Companion planting with scented marigolds in both the previous and current season may decrease nematode populations.

Root rots and fungus are the most common disease problems in bean roots. The most common fungi to affect bean roots are Fusarium, Rhizoctonia or Pythium species. The fungi can persist in the soil for years, living on decomposing vegetation from previous crops. Unfortunately, there are no effective organic fungicides for this problem. Crop rotation is one of the best means of preventing disease. Don’t over-water as it may encourage disease.