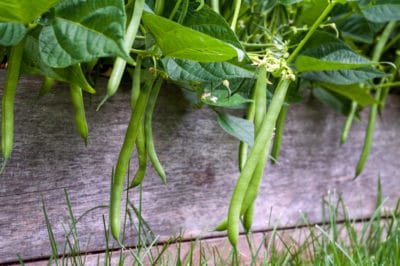 How to Grow Bush Green Beans

Bush green beans are one of those crops that nearly every vegetable gardener grows. Planting beans, with their short maturity spans, means food on the table in short order, and makes them a good choice for succession planting. Unlike their cousins the pole beans, they don't need trellises. Finally, they add nitrogen to the garden and compost pile.

The word green in this context doesn’t refer to a color, but means the beans are immature. Also called string beans, as the older varieties have a tough fibrous string along on side of the pod that must be removed. So-called green beans are actually available in green, yellow to pale cream, purple and striped varieties. The term bush refers to their growth habit.

Since beans are self-pollinating (even before flowers open), hybrids are much less common than open-pollinated varieties. Most hybrids are used in research and are not readily available to gardeners. Here are a few:

Many bush beans were originally vine types that happened to produce a bush plant. Varieties are legion:

Bush green beans don’t need a lot of soil preparation. Average garden soil will usually grow good beans. The seeds must push large cotyledons through the soil, so it should be loose and friable. Add humus such as aged manure, well-rotted leaf mold or organic compost. Plant the beans about four inches apart in all soils.

Bush green beans need a minimum of one inch of water per week and will generally produce better with more. Soaker hoses or drip irrigation eliminate the risk of spreading diseases when handling wet plants. Let plants dry completely after watering before handling leaves or picking pods. Except in desert areas or during drought, it’s not usually a good idea to mulch green bush beans, as it may encourage rot.

Like all legumes, bush green beans will produce their own nitrogen. It’s important not to add additional nitrogen, as it will mean lots of leaves but few flowers or pods. In very poor or sandy soils, you may want to add an organic 5-10-10 fertilizer. Sandy loam and clay soils almost never need additional fertilizer, as they provide adequate nutrition for the plants.

The idea behind harvesting green beans is to catch them while the seeds are still undeveloped. Each variety may be slightly different in terms of the best time to harvest, but the projected maturity date is a good initial target. Choose pods that are slender and just beginning to show rounded seeds. Beans produce fast, so you may need to pick every day.

Beans must be removed from the vines to prevent the plant from thinking that it is done setting flowers. If you leave part of the bean pod, the plant may stop flowering. Always cut or pick the bean stem just above the bean pod for best results. Many bean plants have fairly brittle stems that are easily broken – stabilize them with your other hand while harvesting.

Freezing is probably the best way to preserve texture and flavor of bush green beans. However, they can also be canned. Make sure to use tested recipes and follow directions carefully, as beans are low-acid vegetables. You can also dry them. The pioneer name for these beans is “leather britches” because of their texture. Dried beans must be rehydrated before use.

One reason there are more than 40,000 varieties of beans in the world is because it’s so easy to save bean seeds and they store so well. One variety found sealed in a clay pot in the American desert is estimated to be over 1,500 years old – and yet the beans still grew. Simply allow your beans to grow until the pods become dry, then harvest seeds.

Help: My Beans are Vining

Since bush beans were originally vining types, they do occasionally revert to type. They may grow full-out vines six feet or longer, or produce what are called half-runners, which are usually about four feet long. If you want to save seeds for bush beans, avoid saving seeds from these plants.