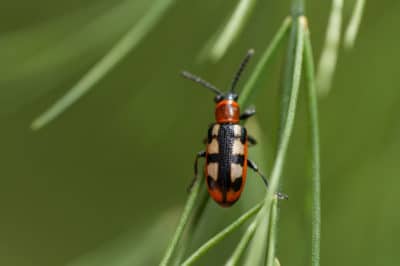 Asparagus is generally a hardy crop with few pest problems, especially when grown in optimum conditions. However, the asparagus beetle and spotted asparagus beetle are two insects which can wreak havoc in your asparagus bed. Learning what these pest look like and taking control measures before the situation gets serious is the best way of managing these pests.

Both beetles have the same general size and shape:

However, the common asparagus beetle is:

The spotted asparagus beetle is:

Common asparagus beetles appear when spears are coming up in the early spring. They then travel up the plants into the ferns. The spotted asparagus beetle arrives later in the season when larvae are found feeding on the ferns and berries of the plants.

Look for brown spots or scars when harvesting asparagus and spears bending into a hook-shape. Later in the season, both beetles feed on the ferns and berries and can do considerable damage to the foliage of the plants.

When asparagus beetles damage the foliage, the plants do not generate enough nutrients to feed the large root system, causing a reduction in the next year’s crop of spears. The damage done directly to growing asparagus spears makes this vegetable unpalatable. Asparagus beetle damage can also encourage the Fusarium fungus which affects the roots of the plant.

Look carefully at your asparagus plants in the afternoon when larvae are most actively feeding. If the infestation is minimal, you may be able to hand-pick or brush-off the pests, dropping them into a soapy water solution.

Cut-down asparagus ferns after they die-back, and burn or hot-compost the stalks to prevent over-wintering of these pests.

Several species of beneficial insects parasitize both types of asparagus beetle, including lacewings, ladybugs, and the minute wasp Tetrastichus asparagi. This beneficial wasp is drawn to asparagus beds on its own, but it is important to make the site safe by not using pesticides which may also kill the wasp.

You can purchase ladybugs or attract them to your garden by planting flowers and providing an open source of water. Using organic growing methods and avoiding pesticides is the best way of encouraging beneficial insects to help you with asparagus beetle control.