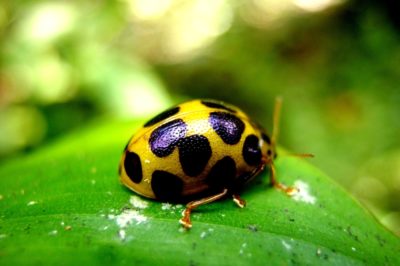 Squash Beetles – Not a Gardener’s Friend

Squash beetles may not be as destructive as squash bugs and squash vine borers, but they can leave their imprint on your plants. Squash beetles are in the same insect family as the beneficial ladybug beetle. Unlike ladybugs that eat other insects like aphids, squash beetles feast on squash leaves. Squash beetles' munching habits leave behind skeletonized leaves with reduced nutrient transferability.

Known also as squash ladybugs or squash lady beetles, the squash beetle has distinctive markings that make identification simple. Ridding the garden of this pest, not the beneficial ladybug, starts with knowing the differences between them.

The squash beetle’s yellowish-orange dome-like shaped body is approximately 3/8 inches long, slightly larger than a ladybug. Its body is dotted with seven large spots on each forewing and four small black spots on the thorax. The squash beetle’s head is the same color as its body.

The harmful squash beetle and the helpful ladybug adults look different, unlike the eggs’ appearance. Both lay clusters of 30-40 yellow oblong eggs on the underside of leaves. Removing the eggs from the leaves may reduce or eliminate the ladybug population.

The larvae are small yellow oval-shaped with black spines sticking upward from their backs. Larvae of squash beetles eat on the underside of leaves potentially doing great damage to the plant.

The pupae of squash beetles are plump yellow grubs that feast on the underside of leaves. On the pupae, there are black spines left over from the larval stage that excrete an oily chemical, a deterrent to predators such as ants.

Squash beetles are not usually a major problem to squash plants, but still should be controlled. Once identified, the numbers of these pests can be reduced in various ways.

Sometimes the most effective insecticide is homemade. North Dakota State University Extension Service recommends making a liquid spray that is effective against squash beetles. Here are the instructions for making this homemade insecticide:

An effective method of eliminating squash beetles is to pick them off the plants. Fill a jar with water and dish soap. Put the squash beetles in the jar and soon they will perish.

Most experts suggest not planting cucurbit crops in the same location two years in a row. Purdue State University suggests planting only once every three years. This will confuse the squash beetles and deter them from returning to your garden.