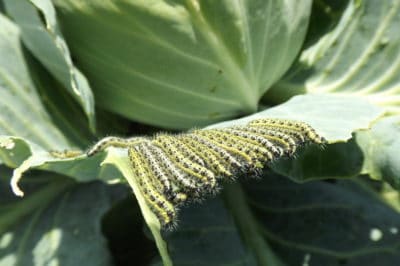 Cabbage attracts several pests, including aphids, flea beetles, cabbage maggots, and caterpillars from a variety of moths. Inspecting your cabbage for eggs, early appearances by the larva, and early signs of damage helps to catch infestations early and prevent serious damage. If your cabbage does become infested, though, organic treatments can control all of these pests.

Getting to Know the Pesky Intruders

The pests that attack cabbage include:

These first three are green caterpillars, and they are sometimes lumped together as ”green worms.” They have distinguishing characteristics, though, and it can be important to know which species is attacking your cabbage.

The cabbage looper caterpillar is a light yellow-green with four white stripes running down the length of its body, and it is so named because, like an inchworm, it has legs on its front and rear ends, but none in the middle. So, like an inchworm, when it crawls, the mid-section of its body arches up into a loop.

The cabbage looper moth has mottled, grayish-brown, 1-1/2 inch wings with a small, silvery, sock-like patch at the center of the upper wings. You’ll see these moths flying around at dusk.

Newly hatched caterpillars are most likely to be on the underside of the lower leaves, but as they grow they move to the center of the plant to feed between the veins of the leaves.

The diamondback moth caterpillar is also yellow-green, but it is small and shaped as if it were molded between a pair of parentheses. It’s most readily identified by two stubby legs that protrude from its rear.

The moth is also small and slender with a grayish-brown body and an upturned “tail”. When its not in flight, the wings are folded. Where the wings of the male moth meet, you’ll see three yellow diamond shapes.

The eggs are shaped like small yellow footballs. They will be on the underside of the leaves and might be laid individually or in small clusters.

You might find the caterpillars feeding anywhere on the plant, but when the cabbage is young, they prefer the bud.

This moth measures 1-3/4 inches long with black spots on the upper wing and a yellow tint to the underside of the wings.

The ridged, bullet-shaped eggs are laid individually and might be found anywhere on your cabbage. They are white when they are first laid but turn dark yellow.

You’ll find the caterpillars on the undersides of the leaves next to the veins or the central rib. They feed near the center of the plant, but do not necessarily feed only near the veins.

These worms also are the larva of various moths, but they prefer not to be lumped together by their color or markings.

Cross-striped cabbageworms measure about 3/4 inch long. They are bluish-gray with black and yellow stripes along the length of the sides of their bodies and black stripes across the width of their backs.

The moth has a 1-inch wingspan and is brown to yellowish brown with darker zigzagged markings on the wings.

The yellowish eggs are laid in masses of 20 or 30 creating a scale-like look on the underside of the leaves.

Cross-striped cabbageworms feed on any tender part of the plant, but they prefer the buds.

Beet armyworms are dark green to black with fine, wavy white lines down the length of the back and a wider stripe along the length of the sides. They have dark heads, and they also usually have a dark spot on each side just above the second pair of legs.

Beet armyworms are the larva of the small mottled willow moth, a gray or brown moth with mottled brown upper wings and white lower wings with dark brown veins and a border with a thin stripe of dark brown and an outer band of white.

The eggs are laid in clusters of up to 80 eggs. You will find the eggs under a covering of cottony white scales.

After they first hatch, you will find the larva feeding together near their egg cluster. As they grow, though, they move away from the cluster, and each larva may feed on several neighboring plants.

Several varieties of cutworms do get lumped together. They are gray with smooth skins that give them a slippery, greasy look, so they are sometimes mistaken for grubs, as is the damage they do to foliage.

They are the larva of several brown or gray, nocturnal, dark-winged moths.

The moths lay their eggs at night on weeds, grass, your cabbage, and other host plants.

Like the moths, cutworms are nocturnal and feed at night on the stems and, sometimes, the foliage of young plants. During the day, they retreat into tunnels underground where they feed on roots and can cut through the stalk, killing the plant.

Flea beetles are small, shiny, striped or solid color beetles of various species that can be brown, bronze, black, or metallic to bluish gray. One thing they all have in common is the large back legs that enable to leap around your plants.

Flea beetles lay their eggs on the ground, and the 1/4 inch long larva feed on the roots of the plants.

The adult flea beetles do more damage than the larva, though. As they feed on the leaves, they create “shotholes” that give leaves a lacy look. When the damage is severe enough, it can stunt or kill young plants. Flea beetles also can spread wilt and blight among your plants.

Like other aphids, cabbage aphids have long antenna and pear shaped bodies. Cabbage aphids are light green with a waxy, grayish coating.

You’ll find cabbage aphids on the undersides of leaves where they suck the sap from your cabbage. The leaves may wrinkle, curl, or cup, and cabbage heads may be stunted.

Cabbage maggots are legless, white larva with pointed heads and blunt rears. They burrow into and feed on the stems and roots of your cabbage. They can riddle plants with tunnels that allow other pests and diseases to gain entrance. Your cabbage may look purplish or gray-blue rather than green and be stunted or wilted.

The eggs are laid by dark gray flies that have three stripes on their backs, black legs, and smoky gray wings.

To reduce the risk of maggot infestations, avoid planting your cabbage early if there is likely to be an extended period of cool, wet weather.

One way to control all of these pests is to grow your cabbage inside of row covers. These covers prevent adult insects from laying their eggs on your cabbage or on the ground around it.

Flea beetles and some moths overwinter in brushy areas. If you have such an area near your garden, mowing it down removes this winter survival haven.

Tilling your garden in the fall exposes eggs and pupae in the soil to winter’s cold, killing them.

Although it’s time consuming, if you find eggs, caterpillars, or maggots on your cabbage, you can remove them by hand. If you find one heavily infested leaf or plant, sacrifice it and remove it to protect the rest.

Cabbage does grow low to the ground, but aphids have very weak legs. If you flick them off of your cabbage with a blast of water from your garden hose, they may not be able to climb back up onto your plants.

If you spread diatomaceous earth around the base of your cabbages, it will puncture soft-bodied caterpillars, cutworms, and aphids that crawl over it.

Bacillus thuringiensis eliminates cutworms, but it can also harm beneficial insects, as can garlic oil spray.

If you plan to use garlic oil spray, you should test the concentration on one plant and dilute it as needed before spraying it on all of your plants to get rid of aphids. You should also test homemade sprays made with alcohol and dishwashing liquid before using them extensively.

Tomato leaf spray is friendly to plants, but tomatoes are related to nightshade, so those who are allergic to nightshade should wear gloves when chopping the tomato leaves to make this spray for controlling aphids on cabbage, kale, and other related plants.

Attracting or releasing insects that prey on these cabbage pests in another way of controlling them. For example, ladybugs or lady beetles, lacewings, and hoverflies prey on aphids while fireflies prey on cutworms.

You can purchase lady beetles, lacewings, and hoverflies to release in your garden, and fireflies are attracted to areas where there are short trees and shrubs in at they use as resting places during the day.

Companion plants can also help repel pests or life them away. Radishes and nasturtiums lead flea beetles away from cabbage while catnip and basil repel them. Imported cabbage white moths are attracted to mustard but repelled by thyme while bittercress, which is related to mustard, attracts the diamondback moth but kills diamondback caterpillars when they begin to feed on it.