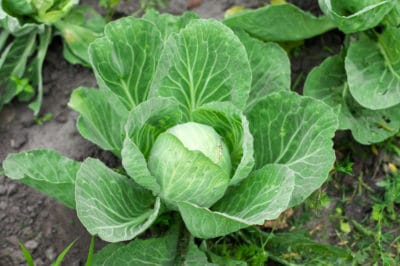 Cabbage, Its Allied Companion Plants, and Its Enemy Combatants

The Character of Companion Plants

Companion plants have other traits that make them good company for cabbage. In general, they have the same preferences when it comes to soil, watering, temperature, and light.

Cabbage likes areas with full sun but cool temperatures. The area should be well-drained at the surface but have nutrient-rich, loamy or sandy soil that retains moisture below the surface. Mulch the soil heavily, and give cabbage 2 inches of water each week. The soil should have a pH of 6.5 or less.

Several plants either repel cabbage’s pests or lure them away.

Plants That Improve the Taste of Cabbage

Some of cabbage’s companion plants improve its flavor.

Plants That Help Cabbage Grow and Be Healthy

You would think that broccoli, cauliflower, and cabbage are such closely related siblings that they would grow well together, but they are like selfish, jealous siblings. All three absorb such a substantial amount of the same nutrients from the soil that the soil might not be able to provide enough if these crops are planted together. So, keep them separated so that all three get enough of what they need to be healthy and grow.

Mustard is also related to cabbage. Cabbage and its siblings are all descended from a wild mustard plant. Because they are all related, though, they all attract the same pests. There is an advantage to growing mustard in one area and cabbage in another area, however. The mustard will lure pests away from your cabbage.

Bittercress, a relative of mustard and cabbage which is also known as rocketcress or winter cress, has been shown by research to lure the diamondback moth and the imported cabbage white moth away from crops like cabbage.

In fact, bittercress produces a substance that is toxic to diamondback caterpillars. When they begin to feed on bittercress, they die. Bittercress may or may not be toxic to imported cabbageworms. Only the diamondback moth and its caterpillar were included in the research.

Tomatoes repel the imported cabbageworm, but cabbage still doesn’t like getting close to tomatoes.

Plants That Benefit Your Entire Garden

Nasturtiums attract aphids, flea beetles, and caterpillars. In fact, aphids likely will prefer nasturtiums to anything else growing in your garden.

While marigolds are particularly beneficial to cabbage, they repel nematodes and beetles and may even repel deer. On the other hand, while flea beetles attack several crops, nematodes and some subterranean beetles prey upon cabbage maggots, so take that into consideration when deciding where to plant your marigolds.

Yarrow not only repels insect pests but also adds nutrients to the soil where it grows and gives a boost to the plants growing near it. At the end of the growing season, yarrow can continue its work by contributing to your compost.

The plants in and around your garden can help attract beneficial insects as well as acting as lures or repellants for harmful ones.

For example, dill, parsley, carrots, and parsnips attract spiders, ladybeetles or ladybugs, and praying mantises that prey on insect pests for many plants.

In addition, fireflies attack cutworms, but fireflies need a place to rest during the day. Planting shrubs and short trees where they can rest will attract more of them to your garden. Trees and shrubs also attract insect-eating birds.

Keep your shrubs well-trimmed, though. Allowing too much growth provides a sheltered habitat where flea beetles and moths could hide for the winter. Proper pruning lets air flow through the branches, which is healthy for the shrubs but decidedly not healthy for the insects attempting to overwinter there.