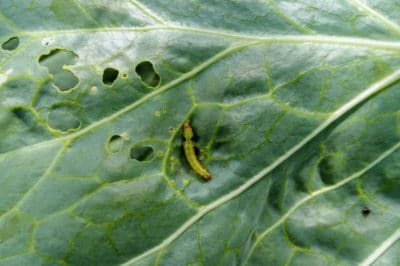 Cutworms attack a variety of veggies in your garden, so you may be more familiar with them. Cross-striped cabbageworms and beet armyworms also feed on your cabbage, though. All three of these “worms” are actually caterpillars, the larval form of various moths. Eliminate them by drawing a line on cutting attacks by either the moths, the worms, or both.

Cross-striped cabbageworms may be less familiar to you because, originally, their range was limited to the southern United States. Over the past several years, though, this caterpillar has been eating its way up the East Coast into New England and also has been found in Illinois and along the West Coast.

The thick-bodied caterpillar grows to about 3/4 of an inch long. Their bodies are bluish-gray with contrasting black stripes across the width of their backs that end in the vivid back and yellow stripes along the length of their bodies.

The cocoons are small. You’ll find the cocoons just below the soil’s surface. The pupa inside will be yellowish-brown.

The moths have brown to yellowish brown wings with purplish-brown to olive markings and darker, narrow, zig-zagged stripes. The wings reach out to a wingspan of 1 inch.

Unlike the moths of some other species that feed on cabbage, the cross-striped cabbage moth lays its eggs in clusters of 20 to 30 on the underside of the cabbage leaves. The eggs are a flattened, yellow ovals, and they overlap each other, which gives them a fish-scale-like appearance.

Damage Caused by the Cross-Striped Cabbageworm

Cross-striped cabbageworms will feed on any tender part of your cabbage plants. They will eat holes in the leaves until nothing is left of the leaves of infested plants but the ribs. They also will bore through the heads. They much prefer the terminal buds. They are most prevalent late in the growing season, and they can leave infested plants with nothing but a skeleton of stems and veins while neighboring plants remain untouched.

Beet armyworms are the caterpillar of the small mottled willow moth. They are usually found in warmer environments, such as the southern United States, and they are most prevalent during late harvests.

Beet armyworms pass through five or more growth stages with changes in coloration at each stage.

Newly hatched caterpillars feed as a group near the egg mass. They remain pale green during the first two stages of growth.

Fine, wavy lines appear crossing the back during the third stage of development.

The backs of the caterpillars become darker during the fourth stage of growth, and darker line appears along each side.

The fifth stage of growth introduces many variations.

As these caterpillars feed, they trail silk threads behind them, creating webs of threads on your cabbage leaves.

As they grow, they become extremely mobile, wandering farther and farther from the egg mass and spreading to other plants. They also become more resistant to pesticides as they grow, so it is important to identify and deal with an infestation early.

The Pupa or Cocoon

You’ll find the pupae in the soil around your plants. It will be light brown and measure about 1/2 inch to 3/4 inch in length. However, beet armyworms are only able to overwinter as pupae in the southern states or in warmer coastal areas, which is their normal range. When they are found in other areas, it is because the moths have flown there. The first hard frost will kill the pupae.

The moth is gray or brown. The upper wings are mottled brown with a yellow dot at the center while the lower wings are white with brown veins and an inner brown border and outer white border. The wingspan ranges from 1 to 1-1/4 inches.

The eggs range from greenish to white. The moths lay clusters of 40-80 eggs, and then covers them with a layer of cotton-like white scales. You will usually find them near the tip of a stem on the underside of a leaf.

A cluster of young beet armyworms feeding together can leave only the stems and veins of your cabbage plants. As the more mature caterpillars separate to feed on their own, they may burrow into the cabbage heads or eat large, irregular holes in the leaves.

Cutworms are the nocturnal caterpillar form of several dark-winged, nocturnal, brown or gray moths that lay their eggs on cabbages, weeds, grass, and other plants.

Although there are several species, their smooth, gray skins tend to get them lumped together. Their greasy look, and the type of damage they do when feeding on foliage, also means that they can be mistaken for grubs.

During the day, cutworms burrow into underground tunnels where they feed on the roots and stems of your cabbage plants. They can kill plants if they cut through the stalk. At night, cutworms emerge to feed on young plants. Usually, they eat the stems, but they also sometimes feast on the foliage.

Drawing the Line on Cutting Attacks From Moth and Caterpillar Armies

Creating a less favorable habitat for moths and caterpillars, creating an inviting environment for natural predators, using organic pesticides, and surrounding cabbage with protective companion plants all work together to defeat attacks by cutworms, beet armyworms, and cross-striped cabbageworms.

During the growing season, immediately remove and discard any cabbage plants – or kale, broccoli, cauliflower, Brussels sprouts, or collard plants – that become diseased or infested with insects. These closely related veggies share most of the same pests and diseases. Eliminating diseased or infested plants prevents those pests and diseases from taking hold in your garden.

At the end of the growing season, either completely clear the roots and stems of these related plants from your garden and add them to your compost or plow them into the soil.

Tilling the soil in your garden at the end of the season also brings the pupae buried in the soil to the surface where they will be exposed to the cold temperatures of winter, killing them.

If you have an area of brush near your garden, many of the moths that lay the eggs that hatch into the caterpillars that attack your cabbage and other plants will feel you have provided them with a resort hotel for the winter. Mow the area down to eliminate this cozy winter habitat.

Each year, when you plan your garden for the next season, rotate cabbage and its sibling plants with unrelated plants. Rotating these plants to a different location each year makes it less likely that pests, fungal infections, and other diseases will become a recurrent problem.

Have row covers ready, and close them as soon as you transplant your seedlings in the spring. Be sure to bury the edges, because that is the only way to be certain that moths cannot crawl under them to lay their eggs.

Diatomaceous earth will puncture the bodies of any caterpillars or soft-bodied insects that crawl over it if it’s sprinkled around the base of your cabbage plants.

If you inspect your cabbages regularly when the caterpillars will be the most active, you have a good chance of stopping an infestation early. You can simply remove the eggs and caterpillars by hand. Dropping the caterpillars in a bucket of water and dishwashing detergent will kill them.

The pests that prey on your cabbage have natural predators of their own that can help control them.

You can purchase trichogramma wasps to release in your garden. These parasitic wasps won’t sting humans, but their larva prey on caterpillars. Planting small, nectar-bearing flowers, such as sweet alyssum, provides food for the wasps and encourages them to remain.

Fireflies and birds prey on cutworms, but fireflies need shrubs or low trees to roost in during the day. Plant trees or shrubs around your garden to attract more fireflies, but keep them well-trimmed so that air and light can reach the inner branches to avoid creating a winter habitat for moths.

Bacillus thuringiensis is a common pathogen that targets cutworms and other caterpillars when it is ingested. It remains active for 24-48 hours after application, and it’s safe for humans and pets. When applying it, though, avoid spraying flowers serve as sources of nectar for beneficial insects.

Various flours reportedly cause caterpillars to bloat and die. Try mixing 1cup of flour and 1/2 cup of table salt, and then sprinkle this powder on your cabbage leaves in the morning when they are still covered with dew.

Citrus spray is more of a repellant than a pesticide. Add the ground up seeds and rinds of any type of citrus fruit to 2 cups of water, and allow the mixture to sit overnight. Strain the pulp, and then add 2 teaspoons of dishwashing liquid. The bitter chemicals and citrus taste drive caterpillars away.

While garlic oil spray is a frequently mentioned organic pesticide, it is used more for aphids, cabbage loopers, and other pests than cutworms, beet armyworms, or cross-striped cabbageworms.

Companion plants can help repel cutworms, beet armyworms, and cross-striped cabbageworms away from your cabbages, or they can lure them to another area of your garden. As mentioned earlier, other plants that may not benefit cabbage directly provide food and habitat for beneficial insects.

Sweet alyssum and other plants with small flowers can be regarded as companion plants for cabbage because the draw trichogramma wasps to your garden.

Shrubs and trees that attract birds and fireflies also serve as companion plants for cabbage.