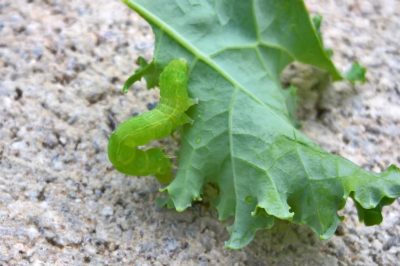 Stop Cabbage Loopers From Looping Around on Your Cabbage

Cabbage loopers are just one of three green “worms” you might see on your cabbage. All three pests are actually caterpillars, and all three have distinguishing traits that help to identify them. You can control any or all of the three with a variety of organic methods, but other strategies can prevent these caterpillars from ever getting near your cabbage.

The cabbage looper is the larval form of the cabbage looper moth. These moths belong to a group of mottled brown, nocturnal moths referred to as owlet moths. You’ll see the moths becoming active around dusk, about a half hour before sunset.

Newly hatched caterpillars are a dusky white and covered with bristles, but as they begin to feed and mature, they loose most of the bristles and become light green with a distinct white stripe running along the length of each side and several narrower and fainter white stripes running the length of their backs. They are narrower at the head and wider at the back, and when they are mature, they measure 1 to 1 1/4 inches long. They are most easily identified by the inchworm-like way that they arch or loop their bodies as they crawl.

The wingspan of the cabbage looper moth measures from 1 1/4 to 1 1/2 inches. The lower wings are comparatively plain. The light brown interior shades to darker brown around the edge with a border of white with dark dots at the outermost edge. Dark veins run throughout the lower wing.

The upper wing is mottled in shades of brown with a distinctive, short, shallowly arced, chain marking. The individual links have tan centers with dark and then white borders. When the wings are expanded, the arc points at an angle toward the outer edge of the wing, but when the wings are folded, the arc points inward toward the moth. A white dot with a tan center appears at the end of the arc.

Cabbage looper eggs are yellowish-white, ridged, and dome-shaped. The moths usually lay their eggs singly on the undersides of leaves, but you might find them in small clusters of six or seven, and you might also find them on the top side of the leaves. You’ll most often find the eggs on larger leaves toward the top of the plant.

When they are ready for metamorphosis, the caterpillars form fragile, silky, thin cocoons on the ground in the midst of plant debris, among clods of soil, or on the undersides of leaves. The green pupae turn dark brown or black as they transform. Male pupae are slightly larger than female pupae.

After first hatching, the caterpillars feed on the underside of the leaves without breaking through to the leaf surface. However, as they grow larger, they begin to eat irregular holes completely through the leaves, and they even bore into the cabbage head. They also leave behind a sticky frass or excrement that contaminates the leaves.

Getting Cabbage Loopers Under Control

Several organic methods will help you to keep cabbage loopers under control. These include:

Cabbage looper pupae and adults don’t survive the colder temperatures of winter, so you won’t find them overwintering very far to the north. In the warmer southern states, though, you can take several steps at the end of the growing season to restrict a return of the cabbage loopers in the spring.

Cabbage Looper Control at the End of the Growing Season

Pulling up cabbage and its close relatives – cauliflower, collards, kale, broccoli, and Brussels sprouts – at the end of the season not only discourages the reappearance of cabbage loopers and other pests that these veggies have in common but also discourages the reappearance of their common diseases. While you can use healthy plants in your compost, discard any that were infected with diseases or infested with pests.

Rotating these plants with unrelated vegetables from year to year also discourages the reappearance of these pests and diseases.

Tilling your garden in the fall not only adds nutrient rich “green manure” to your soil but also exposes cabbage looper pupae, and the pupae of other moths, to cooler temperatures that may kill them.

In cooler temperatures, cabbage looper moths, and others, will seek sheltered sanctuaries in any brushy areas located within a convenient short flight from your garden. Mowing these areas down eliminates these overwintering resorts for moths.

When temperatures start to rise and the cabbage looper moth emerges from its cocoon or its winter haven, it re-launches its invasion of southern gardens and its campaign to migrate north to invade gardens as far north as Canada. So, gardeners both north and south need to take steps to control cabbage loopers in the spring.

One way to discourage cabbage loopers and other pests is to delay spring planting for a week or two if possible. When the moths emerge to start laying eggs, your cabbage won’t be there to host them.

Whether you transplant seedlings into your garden or plant your cabbage seeds directly into the soil, covering it with row covers as soon as the cabbage is in the ground prevents the moths from reaching your cabbage to lay their eggs. Be sure to bury the edges of your row covers to prevent moths or caterpillars from crawling underneath them.

Another way to prevent soft-bodied caterpillars or insects from reaching your cabbage is to sprinkle diatomaceous earth on the soil around your cabbage plants. This mixture of crushed, fossilized sea shells pierces these pests and causes them to dehydrate.

In addition to preventing the moths from reaching your cabbage, you should inspect your cabbage for the caterpillars and the eggs. When you find them, you can pick them off by hand and throw them into a bucket filled with a mixture of water and dishwashing liquid.

Companion plants are plants that favorably impact another plant when they are grown close together. Onion and beets, for example, repel cabbage pests while also enhancing cabbage’s flavor. Plants that are related to cabbage, like mustard and bittercress, attract the same pests as cabbage. They should not be planted near cabbage, but if they are planted some distance away, they can lure these pests away from your cabbage.

Some plants that aren’t listed among cabbage’s companions still benefit it by attracting the natural predators that feed on cabbage’s pests. Parsley, parsnips, carrots, fennel, and dill attract spiders and praying mantises while, if you purchase trichogramma wasps, sowing plants such as sweet alyssum that produce small, nectar-bearing flowers encourage the wasps to stay. The alyssum, and similar plants, also will attract more of the wasps.

Gardeners have a variety of choices in organic pesticides that help control cabbage loopers.

Unfortunately, but probably inevitably, the cabbage looper appears to be developing an increasingly strong resistance to the long-time favorite organic pesticide, Bacillus thuringiensis (Bt). However, studies suggest that loopers that are resistant to Bt may be as much as two times more susceptible to Trichoplusia ni NPV (NPV). Other alternatives include spinosad and pyrethrin.

Bt is a pathogen that infects and kills caterpillars when they ingest it, but it is safe for humans and pets. The spray remains active for only 24 to 48 hours. It’s best to apply Bt as soon as you notice the caterpillars because the smaller ones are more susceptible than larger ones. They stop feeding shortly after the spray is applied, but they may survive for several days before dying. When using Bt, be careful not to spray it on nectar-producing flowers because Bt can harm beneficial pollinators.

NPV is a virus that occurs naturally in Australia. The virus is highly specific, so it is not a danger to humans, animals, or even beneficial insects such as lady beetles or trichnogramma wasps. Infected cabbage loopers stop eating within two days and climb to the tops of plants to die within four to seven days. After death, the bodies of the caterpillars burst open, releasing more of the virus to infect other caterpillars. Because NPV is a virus, researchers believe that it will be more difficult for resistance to develop.

Spinosad is a product of the fermentation process and was discovered in the soil of a rum distillery. Spinosad attacks the nervous system of insects when either touched or ingested, leading to seizures and then to paralysis and death in one to two days. When it is exposed to sunlight, spinosad that has been applied to leaves breaks down in two to 16 days. In sunlight, it breaks down in one day in water.

It sticks to soil rather than migrating through soil to enter the ground water. In soil, it is broken down by microbes in nine to 17 days. Without sunlight, however, spinosad may be present for 30 to 259 days. It does bind to sediment in the same way that it binds to soil, though. In sediment, without oxygen, it breaks down in 161 to 250 days.

After it has dried, spinosad is nontoxic to bees and other beneficial insects, but until it dries, it is very highly toxic to bees. It has a very low level of toxicity for humans and mammals, but it can cause irritation and redness if it comes into contact with your skin or eyes. If it enters your body, it is broken down and eliminated in one to two days. For fish, birds, and amphibians it is nontoxic or has low to moderate levels of toxicity, but it is very highly toxic to eastern oysters.

Pyrethrin is extracted from certain chrysanthemums. Like spinosad, it attacks the nervous system of insects that come into contact with it, causing paralysis and death. With exposure to sunlight, it breaks down quickly with toxicity remaining for less than a day. It has only a low level of toxicity for humans, pets, and birds, but it can be toxic to beneficial insects like bees. It also is toxic to fish and should not be applied to ponds, streams, or other bodies of water.