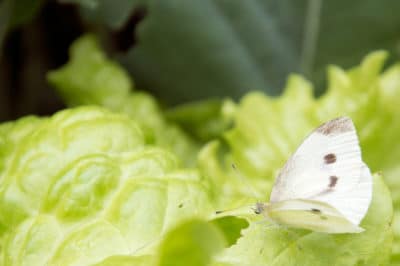 Exporting Imported Cabbageworms From Your Cabbage

The imported cabbageworm is the caterpillar of the imported cabbage white moth. You will most often find these caterpillars feeding on the underside of leaves close to the center of your cabbages near a vein or the mid-rib of the leaf, but they may feed anywhere on the leaves. Several organic methods are available for controlling them.

Identifying the Caterpillar, the Moth, and the Eggs

The fine hairs on this green caterpillar give it a velvety look. It has faint yellow stripes running along the length of its body, and when fully grown, the caterpillars measure 1-1/4 inches long.

Because they are green, imported cabbage worms are sometimes confused with cabbage loopers or the diamondback moth caterpillar, although the latter two are a lighter green. Sometimes, all three are lumped together as green worms, but each has identifying characteristics. It can be important to know which one is infesting your cabbage.

Imported cabbage white moths are white, as their name suggests, but the underside of the wings have a yellow tint. The upper wings have black spots on them. They are small, measuring only 1-3/4 inches long.

The moths lay their eggs individually, and you might find the eggs anywhere on the plant. The bullet-shaped eggs are ridged, and, when they are first laid, they are white. However, as they mature, they turn yellow.

Where Have All the Leaves Gone?

Imported cabbageworms are small, but they are voracious eaters. If you have an infestation, these caterpillars will eat all the leaves, leaving nothing but the stalks and the ribs.

One way to prevent imported cabbageworms from attacking your cabbage is to cover it with row covers when you plant it and leave it covered for the entire growing season. With the row covers in place, the moths won’t be able to come near your cabbage to lay their eggs.

If imported cabbageworms have invaded your cabbage, you have several options, including:

Cabbage Has to Have Friends

Some companion plants can help repel imported cabbageworms, while others lure the caterpillars away from the cabbage.

Because cabbage, cauliflower, Brussels sprouts, broccoli, kale, and kohlrabi are all descended from a common wild mustard plant, insects that are attracted to these crops, like the imported cabbage white moth, are also attracted to mustard.

Research has shown that bittercress, another relative of mustard, not only attracts the diamondback moth but also kills the caterpillars when they begin to feed on it. It may or may not have the same effect on imported cabbageworms.

Thyme, on the other hand, repels these caterpillars.

You can plant both mustard and thyme. Plant thyme near your cabbage to repel imported cabbageworms and plant mustard to lure the caterpillars and moths to an area where you’d prefer that they stay.