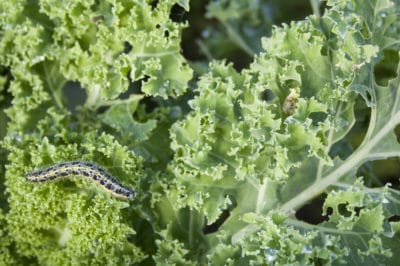 How to Stop Those Greedy Green Worms From Enjoying Your Kale

Those white butterflies dancing above your garden may actually be cabbage moths. They are the most noticeable sign that your kale, and your cabbage and broccoli, are about to come under attack. Never fear, though, several organic weapons are available to help you defend your veggies.

The three different types of caterpillars you might find munching on your kale have one thing in common, the color green. They do have other distinguishing features, however.

These are the most common type of caterpillars found on kale. The eggs are laid by cabbage moths. The caterpillars are green with faint yellow stripes. Their bodies are lightly covered with fine, short hairs that provide a velvety look.

These green caterpillars can be identified by the two stubby legs protruding from the rear. The moths are small and brownish with turned up tails on their bodies.

The easiest way to protect your kale is to cover it with row covers. Row covers prevent the moths from reaching the kale leaves to lay their eggs.

It’s time consuming, but another method is to check the underside of the leaves for the caterpillars and the tiny eggs. When you find them, pick them off the leaf by hand.

You can also select companion plants that repel the caterpillars or that lure them away from your kale and plant them with your kale. For example, imported cabbage worms are repelled by thyme and attracted to mustard.

A research study tested a member of the mustard family, bittercress, which is also known as rocketcress and winter rocket, as a companion trap crop.

Why Plants in the Mustard Family Work

Like kale, bittercress contains glucosinolates, which the diamondback moth uses to detect plants that should serve as a good host for the caterpillars. In a field planted with bittercress and cabbage, 99 percent of the eggs were laid on the bittercress. However, the moths failed to detect that bittercress also contains saponins. The caterpillars die shortly after hatching as they begin to feed and absorb the saponins.

Other organic defenses include:

Some of these defenses also protect kale from other pests such as aphids.

What the Old-Timers Did