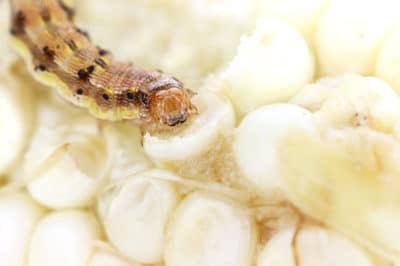 Identifying and Eradicating the Corn Earworm

Corn, both sweet and field varieties, is one of the most popular plants in gardens all over the country. Since it is a relatively easy plant to grow and care for, gardeners of all skill levels and in nearly any planting zone can grow corn. However, many different pests can ruin an entire crop, and the corn earworm is one of the worst.

What is a Corn Earworm?

The corn earworm is a pest that seeks out specific plants like tomatoes, cotton, and corn. Despite the name, corn earworms first appear as small brownish-yellow moths with a wingspan of about 1-1.5 inches (2.5-3.8 cm). You are more likely to notice the moths in the evening, as they are not typically active during the day.

Adult corn earworm moths lay their eggs in the silk of your corn. Those eggs in turn hatch into larvae, which eat their way down the ears of corn. If you have an untreated corn earworm problem, you will likely lose the entire crop of corn.

When to Look for Corn Earworms

Since the adult corn earworm moth lays eggs in the silk of each ear of corn, pay close attention to the development of your corn stalks. You can usually see the corn silk appear roughly two months after the corn seeds have germinated.

If you notice the moths appearing, you need to take immediate steps to eradicate them. Once they lay their eggs, the problem becomes much harder to control.

Tip: The eggs are microscopic, about the size of the head of a pin. They are hard to see with your naked eye.

Why Corn Earworms are Dangerous to Corn

There are several reasons why the corn earworm is such a pervasive pest for corn of all varieties.

Tip: The life cycle of the corn earworm is roughly three weeks. It is feasible that you can have several generations appear in one growing season, especially if you stagger your corn planting to provide fresh corn all summer.

How to Get Rid of Corn Earworms

Although some gardeners choose to combat pests using heavy-duty commercial insecticides, there are many practical ways of eradicating the corn earworm moth without using dangerous chemicals.

Prevention is naturally the first step to getting rid of the corn earworm problem. For example, since the pupae fall to the ground to hatch into the moths, it makes sense to get rid of as many as you can while they are still in pupae form.

If you till the soil in the fall after the corn season and again in the spring before you plant, you can unearth the pupae, and the weather will kill them before they can hatch.

Tip: Chickens are also a great way to get rid of the pupae. Let them free range over the tilled area, and they will gladly eat as many insects as they can find!

Getting Rid of Infestations

If your methods of prevention fail and you find yourself with an influx of corn earworm moths (and eggs and larvae), you will have to take an aggressive approach to get rid of them. Integrated Pest Management is by far the best way to get rid of this particular pest.

Natural pheromone traps can help attract the adult moths, which will prevent them from landing on the corn and laying eggs. A wasp called a Trichogramma Wasp will eat any eggs that do get lain.

If you do not notice the moths (which is likely since they appear in the evening and overnight) and find eggs or larvae, you can also release insects like damsel bugs or green lacewings.

If all of these methods have failed, there are also organic insecticides that work to kill the corn earworm moth. However, even though the ingredients are natural, these methods should only be used after less harsh methods have been tried.

Tip: Beneficial insects can often be purchased at your local nursery, or ordered online from a reputable garden store.

Kill the Bugs to Save Your Crop

Regardless of which method of eradication you use, you need to be aware of the health of your corn plants from germination to harvest. If you get an infestation of corn earworm and do not get it under control immediately, you are likely to lose your entire harvest.