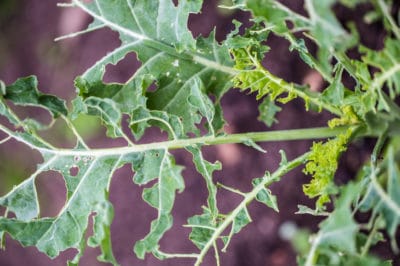 How to Protect Your Kale From Pesky Pests

Kale is easy to grow and, with proper care, has few problems with insects once the plants are established. If an insect infestation should appear, though, organic treatment methods are available.

The insects and other pests that are attracted to kale include:

Three types of caterpillars sometimes are referred to collectively as “green worms”, but each has features that distinguish it from the others. If you see them, you can pick them off the leaves by hand.

Some aphids can be so tiny that they can only be seen under a microscope. All aphids have pear-shaped bodies and long antennae. However, the different species can be identified by color and whether they appear to have a waxy or woolly coating.

You can discourage aphids with a spray of cold water or a mixture of water and dishwashing liquid.

Flea beetles are small, shiny beetles with large back legs that enable them to leap from leaf to leaf like fleas. They can be solid or striped, and colors range from bluish to metallic gray to back, brown, or bronze.

While the larva hatch from eggs laid on the ground and feed on plant roots, the adults feed on the leaves, especially newly formed leaves and seedlings, creating small, round “shotholes”. These scattered shotholes give new leaves a lacy appearance. The holes are not a direct threat to established plants, but flea beetles can spread blight and wilt from plant to plant.

Adult flea beetles spend the winter in brushy or wooded areas. By mowing down any brush that is near your garden in the fall, you eliminate the flea beetle’s winter habitat.

Tilling your garden in the fall not only makes spring planting easier but also exposes flea beetle eggs to the cold.

Flea beetles begin to leave their winter habitat when the temperature reaches 50°F (10°C). You can save your seedlings by delaying planting or transplanting your kale for about two weeks after temperatures warm to that point.

If you seal your row covers completely immediately after transplanting your kale, they can keep flea beetles away.

Plant basil or catnip near your kale to repel flea beetles and use radishes and nasturtiums to draw the flea beetles away to another area.

If you already have flea beetles on your kale, add one tablespoon of liquid dishwashing soap to a solution consisting of five parts water and two parts rubbing alcohol and spray it on your plants, or dust your plants with plain talcum powder.

Like the green worms, cutworms are caterpillars. They are the larva of various dark-winged, brown or gray moths. They are sometimes mistaken for slugs, and the damage they do when they climb to the top of plants in late summer also can be mistaken for damage caused by slugs.

Cutworms favor seedlings and young plants, feeding on the roots and sometimes the foliage. They can cut completely through the stems from below ground, killing the entire plant.

As with flea beetles, mow down any tall grass or weeds around your garden to destroy the winter habitat of the moths, till the soil in the fall to expose the cutworms and eggs to the colder temperatures, and delay planting or transplanting by two weeks in the spring if that is possible.

Fireflies and birds are the cutworm’s natural predators. You can attract fireflies by planting shrubs and short trees near your garden to give fireflies a place to rest during the day.

For a small garden, make 4” wide cardboard collars to place around the plants as you transplant them, or save the cardboard tubes from toilet paper rolls and plant your seeds inside them. When your seedlings are ready for translating, plant them with the tube still around them.

Cutworms prefer to feed from dusk into the night and on cloudy days. When they are not active and feeding, they tend to curl up. Put on a pair of gloves and pick them off of your kale while they are out feeding.

While Bacillus thuringiensis can also harm butterflies, applying it in the afternoon can eliminate cutworms. Diatomaceous earth punctures soft bodied pests like cutworms when they crawl over it.

Sprinkle egg shells, coffee grounds, or an oak leaf mulch around your kale.