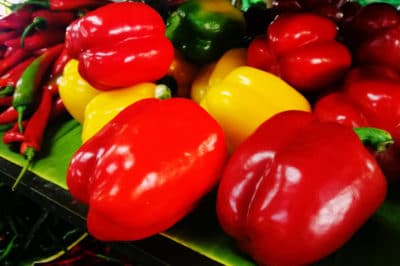 Bell peppers are members of a very large plant family called nightshade or Solanacaea. Other members of this plant family include tomato and eggplant. In fact, the nightshade family consists of herbaceous plants, vines, shrubs, trees, and tubers. So, what about bell peppers? Do they have a gender? Are the lobes on the bottom of the fruit indicators of something?

In reality, there is no gender difference between peppers with three lobes and peppers with four lobes. This is a random genetic expression that occurs on all pepper plants. It isn’t a good indicator of variety, sweetness, number of seeds, or much of anything. Pepper plants can produce fruits with three, four, or even five lobes all on the same plant.

Unisexual flowers may grow on different plants meaning that a species has ‘male’ plants and ‘female’ plants. In this case, gardeners must have both sexes to produce fruit or seed. These species are called dioecious and plants include:

If unisexual or bisexual flowers occur on the same plant the species is called monoecious and pollination can occur with only one plant. Green peppers are monoecious plants with bisexual flowers. Every flower on a pepper plant has both male and female organs.

The botanical male sex organ is the stamen and this is what produces pollen. The pollen must transfer from the stamen to the female organ or the pistil. This is what fertilizes the flower and creates fruit.

Unisexual flowers depend on vectors for pollen transfer. Bees, flies, birds, and butterflies are all common pollen vectors, which is why we often call them ‘pollinators.’ Wind is another pollen vector which plants like corn and wheat rely on. Bisexual flowers like those on a bell pepper plant do not necessarily require a vector.

Peppers do require a bit of wind or insect activity to encourage pollination. Some flowers will pollinate on their own and others may not without help. Many gardeners hand pollinate their blooms to ensure maximum production.

The fruit of a plant is actually just a casing for the seed contained within. Fruits are neither male or female. Fruits from dioecious species will have male seeds and female seeds contained within the same fruit. All female or bisexual flowers of a plant will produce fruit if pollinated.