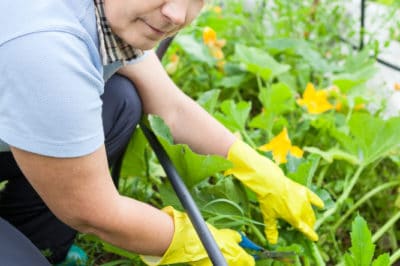 Small zucchini seedlings transform into large, lush plants in just weeks, followed by a bountiful harvest of delicious zucchini. At this point, the rather large plant can begin to occupy the space of other crops. The plant growth and fruit production of the other crop can be stunted from such crowding. Pruning zucchini plants can be beneficial to the other crop and the zucchini plant.

Zucchini pruning chores can be as simple as tearing off part of an insect egg infestation or as drastic as cutting off several stems and leaves. A heavily pruned zucchini plant loses much of its original beauty, but gains other rewarding benefits. Important reasons for pruning zucchini plants are:

Pruning diseased or insect-infested leaves and stems seem like a wise task to perform, but pruning healthy zucchini parts can cause a bit of new gardener anxiety. Experienced zucchini growers know that proper pruning will benefit the plant in many ways.

Pruning should not begin until after four to six zucchini fruits have grown on the plant. Each plant will have unique pruning needs. Evaluate the needs and prune by following these guidelines:

Removing any zucchini plant part, including the fruit, should only be done with a sharp implement such as a knife or shears. Using dull tools for pruning may injure the plant. Twisting the stalks or leaves off may do even greater damage. Disinfect pruning tools between use to prevent diseases from entering freshly cut plant parts.