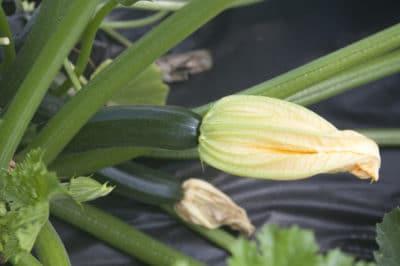 Dealing with Blossom-End Rot in Zucchini

Blossom-end rot is a common problem in zucchini plants. Though the soft, rotting fruits might look like the result of disease, it's actually caused by a lack of calcium in the developing fruit.

Blossom-end rot begins as a soft, bruised or leathery-looking spot on the end of the fruit. This grows and darkens as mold and bacteria attack the damaged fruit. Blossom-end rot often affects multiple fruits on different parts of the plant, but may leave some plants entirely unaffected.

Zucchini are not the only vegetables that are affected by blossom-end rot. Though this “disease” doesn’t spread from plant to plant, if you notice the symptoms of blossom-end rot in other vegetables, it may be a warning that your soil is calcium deficient. Watch for signs in these plants:

While blossom-end rot is caused by calcium deficiency in the plant, it’s not always a sign your soil has low calcium. Before planting your zucchini, give the soil a thorough testing workup. If your calcium is low, adding an amendment like bone-meal or oyster shells, along with your usual compost mixture, will give your soil a boost.

Uneven watering can also contribute to the onset of blossom-end rot. Low water levels inside the plant make it difficult for the vines to transport calcium from the soil to the developing fruits.

Because wet, humid environments contribute to zucchini diseases like powdery mildew, don’t rely on heavy mulch to keep your plants from drying out. Insead, water regularly using drip irrigation or soaker hoses. This gives your plants the support they need without encouraging fungal diseases.

Avoid over-fertilizing your plants. Young plants that are growing rapidly often set fruit with blossom-end rot very early in the growing season. This isn’t necessarily an indication that your soil is deficient, but that your plant is growing so quickly it can’t always deliver nutrients where they’re needed. Adding high-nitrogen fertilizer only encourages more rapid growth, compounding the problem.

How to Treat Blossom-End Rot

Unfortunately, there’s no way to reverse the effects of blossom-end rot on already-damaged fruits, but you can improve the health of the plant so that later-season fruits develop normally.

If your soil is calcium-rich, and you’re watering regularly, give your plants a boost with a foliar fertilizer containing calcium. Though most of the calcium sprayed on the leaves doesn’t end up elsewhere in the plant, it does free up the calcium coming in through the root system to be sent to the fruits instead of the leaves.