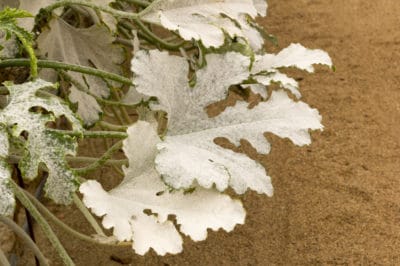 Though zucchini plants are hardy and easy to grow, they are susceptible to several plant diseases. If your zucchini aren't doing well, these are some of the likely culprits, and how to handle them.

This fungal disease is very common in many types of cucurbits—plants in the squash family—and can also affect other plants in your garden. It attacks during warm weather later in summer.

To treat powdery mildew, first remove severely affected leaves. Disinfect the knife or shears you use to avoid spreading the fungus. Wet leaves will allow the fungus to thrive, so water your plants at soil level. When planting, leave plenty of space between plants to improve ventilation.

Powdery mildew can kill your plants if allowed to go unchecked, so if preventative measures aren’t enough to get it under control, use neem oil or a copper- or sulfur-based fungicide to treat your zucchini.

Transmitted by cucumber beetles, bacterial wilt can easily be mistaken for other factors that cause leaves to wilt and die, but it differs in that it affects the entire plant instead of individual leaves.

Unfortunately, there’s no treatment for bacterial wilt itself, but because it’s only carried by cucumber beetles, you can still defend your plants. Neem oil and diatomaceous earth are organic-friendly insect repellants that can help get rid of the beetles once they appear. You can also prevent them from attacking your plants by using row covers.

One common cause of spots on your zucchini’s leaves is squash mosaic virus. This virus can be spread by seed companies that don’t properly screen their seeds, and also by the zucchini grower’s least favorite bug: cucumber beetles.

Since this disease is viral, there’s no way to cure an infected plant, but as with bacterial wilt, you can prevent it. Purchase seeds certified free of squash mosaic virus, and take precautions against cucumber beetles. If you do have infected plants, carefully remove and destroy them to keep the virus from infecting your garden’s soil.