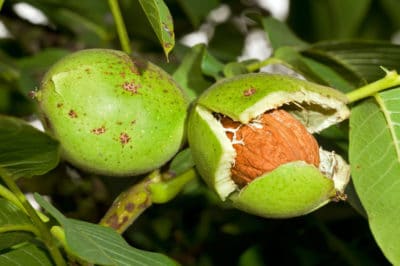 Things You Might Not Know about How Walnuts Grow

We love their earthy flavor and crunchy texture, but how many of us wonder how walnuts actually grow? The answer is on trees -- but not the kind of trees that give us chestnuts and hazelnuts. Those are nut trees; walnuts come from the same kind of fruit trees as cherries, peaches and apricots. And that’s not the only surprising thing about the way they grow!

For the sake of communicating, botanists and horticulturists divide vegetation into different categories. They categorize fruits and nuts differently. A fruit is what contains a plant’s seeds and according to the experts (who haggle over the specifics), walnuts count among the stone fruits known as “dry drupes.”

A dry drupe has a fixed peel covering an inner shell that contains a single seed. Every walnut possesses a green outer hull, wrinkly shell and edible kernel. But anyone whose only encounters with walnuts are at the grocery store has never seen one with its outer hull intact.

Every walnut begins as a flower and every flower begins as a bud. But, because walnut buds don’t bloom until their second summer, many never reach the harvesting stage. Why? Both black and English walnut trees are known for fruiting heavily one year and being nearly barren the next. Why does this happen and what’s a walnut grower to do?

Alternate (or biennial) bearing happens because, in heavy years, walnut trees divert most of their energy to their developing crop. Very little goes to buds destined to bloom the following summer. It’s called bud suppression, and it’s one way the trees have of compensating for poor growing conditions.

Breaking a walnut tree’s alternate bearing habit takes time, but it’s the best method of ensuring a respectable crop of nuts each year. Effective measures include: