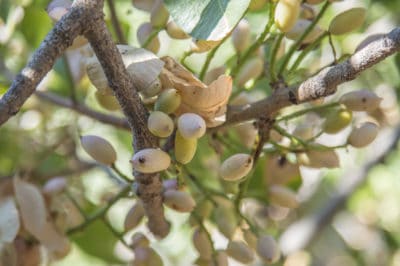 The Nuts and Bolts of How Pistachios Grow

In China, they’re called “happy nuts,” because with half-open shells and red-hulled kernels, they seem to be laughing. Petite pistachios don’t just look friendly; they’re bursting with heart-friendly fat yet remain the most waistline-friendly of all nuts. Even better -- as we explain right here -– pistachios grow on trees that tolerate some very challenging conditions. To find out if they’ll grow for you, read on!

The History of Pistachio Trees

The pistachio tree’s (Pistacia vera) history is a murky one, but archaeological digs in Turkey have unearthed evidence that its nuts were on humankind’s menu more than 9,000 years ago. Sometime in the first century A.D., Syrian traders brought it to Italy and from there it spread through the Mediterranean.

Pistachio Trees in the U.S.

The first pistachios arrived on American shores in 1854 but commercial production didn’t begin until the 1970s. They’re suitable grow in USDA plant hardiness zones 7b through 10. But their very specific climate requirements limit commercial U.S. plantings to:

So, while they’re one of a handful of fruit trees (yes, fruit trees!) to flourish in the desert’s soil and heat, pistachios only produce harvestable nuts in a tiny part of their growing zones.

Pistachios’ climate needs shift with the seasons. They require:

Why Is Climate So Important?

When winter isn’t sufficiently cold, a pistachio may have fewer flowers and fruit than normal. Or its compound leaves could produce three leaflets instead of five. Less photosynthesis means a smaller crop. Where summer isn’t sufficiently hot, much of its nut crop will be empty shells. To grow pistachio nuts, you need very hot summers and cold but mild winters.

Where to Plant Pistachio Trees

Having the right pistachio-growing climate is one thing; taking full advantage of it with the right planting site is another. Soil, sun and spacing all make a difference in crop size.

Pistachio trees have adapted to desert life with taproots that take up water from deep within the soil. They also handle salty or alkaline soils well. That said, they perform best on a planting site with loose, well-draining sandy loam and a slightly alkaline pH between 7.1 and 7.8. The soil should be at least 7 feet deep before encountering root-restricting hardpan.

Expert gardener’s tip: For pistachios, water-retaining soils can be a death sentence.

Give pistachios a site in full sun (no to minimal shade). Because you need female and male trees to produce nuts, your site should have with room for at least two trees. Allow 15 to 18 feet between a single pair and 20 to 22 feet between orchard rows.

Pistachio trees are built to survive drought. But insufficient watering between late winter and early summer diminishes the quantity and quality of their nuts. It also makes a big difference in the following year’s performance. During those months:

How and How Much to Water

The most economical and safest way to water pistachio tree is with drip irrigation. By avoiding saturated roots and reducing humidity around the trees, it thwarts fungal disease.

From late winter to early summer, a budding, flowering or fruiting pistachio needs about 40 gallons (150 liters) of water per day. That increases to 50 gallons (190 liters) daily from July to mid-August, during nut formation. The goal is to keep the top 4 feet of soil moist until watering stops before harvesting the crop in late August or September.

Between spring budding and harvest, pistachio trees burn through lots of nitrogen. Supply what they need organically with a late-winter or early-spring application of well-aged, grass-fed livestock manure. Spread 20 to 25 pounds of it evenly over the soil around each tree and water well.

For the first three years after planting, pistachio trees benefit from a foliar spray of copper, boron and zinc. Start treatment after they leaf out in spring when the leaves are still thin. Reapply every three weeks until the leaves drop in fall.

Supplement older trees with a foliar spray of boron and zinc when their buds break in early spring, when their flowers bloom and as they enter dormancy in fall.

Even the most pampered pistachio trees can’t grow nuts without proper pollination. And that only occurs between compatible male and female pistachio cultivars. One male typically produces enough pollen for 10 to 15 females. The most commercially successful pairings include:

Expert gardener’s tip: Pistachios are wind pollinated. Centering a male tree among a group of females is the best way to ensure even pollen distribution. Some growers recommend one male for every seven females.

Like many fruit trees, pistachios alternate heavy and light crop years. In light years, they put very little energy into producing nuts and lots of it into setting buds that will flower and fruit the following summer. Alternate bearing is a natural adaptation and one reason why pistachio trees can survive poor growing conditions.

Early-spring pruning balances — but won’t completely break — pistachios’ on-off crop cycle. Thinning the fruit buds (they’re larger than the leaf buds) reduces the crop in a heavy year and increases it in the following light one.

One tiny pest and a pair of fungal diseases can wipe out a pistachio crop. Fortunately, both can be managed organically.

Pistachio trees’ major pest is the navel orangeworm (NOW). It burrows into a nut as soon as the shell splits, devouring the kernels and covering them with excrement. In the wake of this pest, toxic fungi often attack the damaged nut.