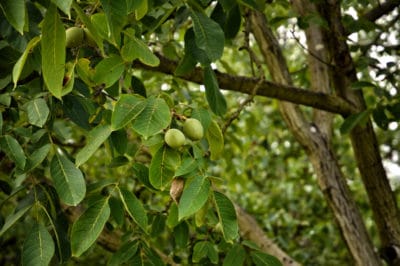 Imagine sitting in the shade of your English walnut trees (Juglans regia) and relishing a brownie studded with their buttery, nutritious walnuts. Then, imagine several generations of your family doing the same. In the right conditions, English walnuts beautify their surroundings and nourish their caretakers for centuries. We answer all the FAQs about the basics of growing these very special trees!

How are English walnuts different from black walnuts?

From a grower’s standpoint, English walnuts are more desirable than black walnuts for two reasons:

Where do English walnut trees grow?

Wild English walnut trees grow in USDA plant hardiness zones 3 through 7. Commercial cultivars, however, are adapted to the climate of California’s Central Valley (hardiness zone 9a). Nearly all English walnuts grown in the United States come from there.

Do they have other climate requirements?

Why do they need chilling hours?

How long of a growing season do they need?

To grow walnuts, you should have a frost-free growing season of 140 to 170 days. The longer, the better.

How much heat can they take?

Do all English walnut trees need a cross pollinator?

Not the many self-fertile ones. They can set nuts without having a compatible cross-pollinator nearby. Good choices include ‘Chandler,’ ‘Hartley,’ ‘Franquette’ and ‘Ambassador Carpathian.’

What kind of soil do they need?

What about sun and water?

To flourish, they require six or more hours of daily sun and 50 or more inches of annual rainfall. The heaviest harvests occur where half the rain falls during the summer. During drought, water them slowly and deeply once a week so the taproots get a drink.

How much fertilizing do they need?

Here’s how to fertilize English walnuts:

It doesn’t get much easier than that!