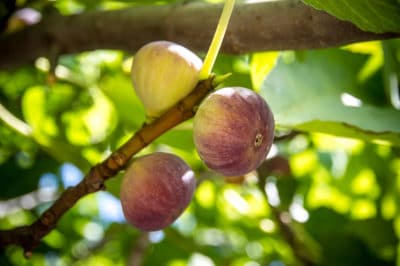 When Do Fig Trees Bear Fruit?

Fresh figs are a delicacy for many people. The fragile fruit is difficult to ship and must be ripened on the tree. Unlike many temperate zone fruits, the fig can bear two crops, although the first crop in some varieties isn't worth eating. Figs are also a little slower to bear than many fruits.

Figs are a Mediterranean native that have spread around the world to areas with similar climates. They prefer warm arid conditions such as those often found in USDA Zones 10 to 11, but many figs are hardy down to Zone 6. They grow well in almost any soil as long as they have good drainage and many are drought-resistant.

Fig season can run from May to December if you choose different varieties. These are possible choices:

Figs will not bear fruit until they are mature. The variety you plant and the growing conditions affect maturity. In the first year or two, most of the plant’s energy is focused on developing root mass. If the tree experiences excessive cold or severe drought, or the soil is very poor, maturity will be delayed. In most cases, figs won’t produce good fruit for five to seven years.

Many figs produce two crops a year. The first crop, called the breba crop, is produced on second year wood. This early crop is more susceptible to frost damage and may be of lesser quality than the main crop. The main crop, which matures several months after the breba crop, grows on wood from the current season.

Some figs require a pollinator, while others are parthenocopic, or self-pollinating. Most commercial figs fall into the latter group. Those trees that do need a pollinator are pollinated by tiny wasps that enter the fruit. The fig flower is internal – the inflorescence is called a synconium – so don’t expect fig trees to bloom. They will produce small green “fruits” instead.

Fig trees are long-lived. A lifespan of 300 years is not unusual. In California, fig trees that were planted in commercial orchards more than 100 years ago are still bearing fruit. In some cases, the size of the crop declines as the tree ages, but most growers expect a productive lifespan of 30 to 40 years. Good cultural practices can extend tree life and bearing.