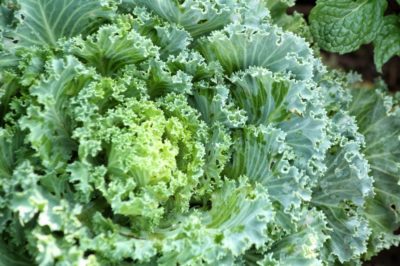 Where Kale Grows – Around the World and in Your Garden

Kale’s ancestor, the original Brassica oleracea, a wild mustard that still exists, was once the one and only Brassica oleracea. It grew in countries around the Mediterranean and on the French and British coasts. Thanks to differences in human preferences, though, we now have kale, cabbage, cauliflower, broccoli, Brussels sprouts, collards, and kohlrabi with new B. oleracea cultivars still emerging as new preferences develop.

Who’s Been Eating Our Kale

The wild mustard that has become the ancestor of all of our B. oleracea variations has large, flat, elongated leaves that grow in a cluster at the base of a central stalk, much the way kale grows today. Compared with our kale and collard, though, wild mustard has a limited number of leaves.

As early as the fourth century B.C., the Greeks had transformed wild mustard into flat-leaved and curly-leaved, loose-leafed cabbages, which they grew as food and for medicinal uses. To maximize their harvests, both the Greeks and Romans selectively saved and sowed seeds from the plants that produced the most leaves, so the plants more closely resembled our kale and collards.

The Romans called these ancestors of modern kale “Sabellian kale”, and from the time of the ancient Greeks and Romans through the Middle Ages, kale was one of the most common vegetables grown in Europe.

Possibly because the original Brassica oleracea gained significant genetic diversity from growing over such a wide-ranging geographical area, growers have been able to develop the various traits that created the range of cultivars that we have.

For example, the colonists brought kale to North America in the 1500s, and then after 1600, farmers developed cabbage, broccoli, cauliflower, kohlrabi, and Brussels sprouts. The Japanese created broccolini, a hybrid of broccoli and kai-lan, also known as Chinese broccoli, in 1993, and they also developed several varieties of ornamental kale.

In addition to the plain- and curly-leaf varieties of kale, we now have:

We also have kale varieties with names that reflect kale’s history, such as:

Where Does Kale Grow?

Clearly, although culinary and ornamental kale are now cold weather crops, kale has grown in many different climates, including warm, Mediterranean ones. Even though walking stick kale hails from an island in the English Channel, both walking stick kale and tree kale retain a preference for warmer climates and grow better in those areas. In fact, tree kale is grown along the California coast and in Hawaii.

Where Will Kale Grow in Your Garden?

Disregarding the disagreement among members of the kale family over whether warm or cool climates are better, all kales otherwise have similar preferences. Choose a location where your kale will receive full to partial sun, and avoid areas that become muddy or where standing water collects. The soil should have a pH balance between 5.5 and 6.8.

Tree kale and walking stick kale require lots of space, since they should be planted 20 to 40 inches apart if you want to grow them full size to harvest larger leaves. These two kale varieties will also need the support of a wall or a tree stake.