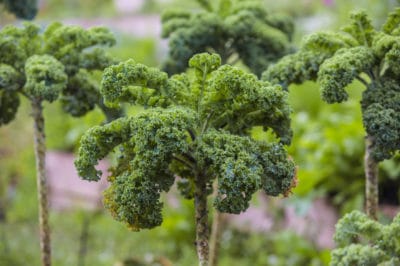 Walking stick kale comes from the island of Jersey, which is the largest of the Channel Islands. These islands are in the English Channel off of the northern coast of France. The leaves, which grow in a tuft at the top of the stalk, were used to feed the sheep and cows that were raised on the island. Five of the plants could feed 100 sheep or 10 cows.

Walking stick kale generally grows to a height of 8 to 10 feet, but it can reach 18 to 20 feet. The tuft of leaves at the top make the plants top heavy, and, if not staked, the stalks tend to bend over, creating a naturally-grown cane handle at the root end. Cane handles were also formed by heat-treating the stalk and then bending it at the root end. The stalks harden as they dry, and they are then lightly sanded and varnished. By the early 1800s, 30,000 walking sticks a year were being sold. Waking stick kale was also used as rafters in buildings and as fencing.

Whether you start your walking stick kale from seeds or cuttings or indoors or outdoors, growing it is a bit different from growing garden kale or even tree kale. You should:

Walking stick kale grows as a mostly bare stalk with the tuft of leaves at the top rather than branching out as tree kale does, so pruning it as you would tree kale probably will not encourage branching.

Walking stick kale prefers the same growing conditions as other kales. Choose as spot that with well-drained, loamy or sandy soil that receives full to partial sun. Like tree kale, though, walking stick kale is a perennial that can live for up to at least three years. It’s more likely to live longer in more temperate climate zones.

Because walking stick kale grows so tall so quickly, it is less bothered by kale pests than even tree kale is.

Nine plants should produce eight usable walking sticks, but only one is likely to be perfect.

When encouraging walking stick kale to form a hook in the stalk, you will need a either a 6 foot long 2 inch x 2 inch stake or a 1 inch in diameter metal pipe. Place the stake or pipe 8 to 10 inches away from the plant and anchor 12 inches of the stake or pipe in the ground. This allows space for the hook to form.

When the stalk slides down close to the ground, dig a space underneath it so that it will sink below the level of the soil. Place the soil you remove as you dig over and around where you believe the crown of your walking stick kale is to prevent any roots from being exposed as the crown of the plant shifts in response to the weight of the sinking stalk.

Continue removing soil to allow the hook of the walking stick to expand until you believe that it is about 6 inches below the top of the soil. When the hook reaches that level, cover it with soil so that it begins to harden as a tree root does. Prune off any shoots that appear.

At the end of the growing season, leave the stalk in the ground. Dry winter air will draw moisture from the stalk and cause it to harden further.

By February, your walking sticks should be sufficiently hardened to pull your plants from the ground. Shake the soil from the roots and cut them off at the crown of the plant. Use twine to hang your walking sticks by their hooks in an airy space where they will be sheltered from rain and allow them to dry until about July.

When your walking sticks feel like they have enough weight, hardness, and stiffness to successfully hit a golf ball, lightly sand them to remove spurs around the leaf scars, and then seal them with varnish. Protect the tip of your walking sticks from wear by adding a cap called a ferrule.