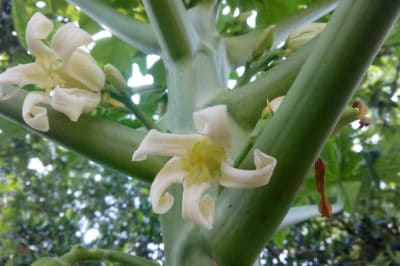 3 Types of Papaya Flowers: Which Ones Grow Fruit?

Many home gardeners that grow papaya wonder why the plants don’t produce fruit. It all relies on the papaya flowers. If you notice that your papaya tree develops fruit, only to have them fall off when they’re barely the size of a golf ball; it’s because of flowers that weren't pollinated.

Some people think that papayas are trees, but they’re plants. The plants produce three different types of sexual flowers. These are male, female and hermaphrodite. The following lists the features of the three papaya flowers:

Since male papaya flowers don’t have ovaries, they can’t produce fruit. They have stamens that bear the pollen that pollinates the flowers with ovaries. Male flowers look different that other papaya flowers because they grow in large numbers on drooping stalks, known as peduncle.

The female flowers have the ovaries that the males pollinate to produce papaya fruit. The flowers grow on the plants’ stems where the leaves attach. The flowers are pointed at the tip and bulb-shaped at the base before they open. Before the female flower can produce mature, ripe fruit, a male or hermaphrodite flower needs to pollinate it. If the flower isn’t pollinated, the developing fruit falls off while still small. The most common pollinators of papaya are:

These flowers have both stamens that carry pollen and ovaries, so they’re self-pollinating. The flowers form on the leaf axils. Most papaya growers prefer hermaphrodite plants because they don’t need male or female plants to grow fruit.

If you’re growing papayas at home, it’s a good idea to plant several of them. This way, there’s a better possibility that you’ll have either a male and a female, or a hermaphrodite that can pollinate itself and a female. If you take seeds from hermaphrodite papaya plants, you’ll usually get one female to two hermaphrodites. So, if you plant three seeds, you have a good chance of growing at least one papaya that will bear fruit.