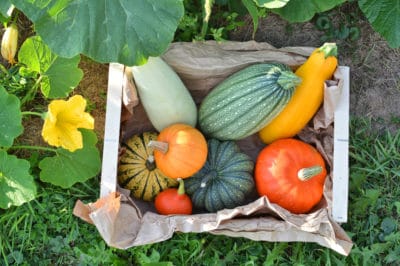 In nature, certain plants complement other plants in various ways. Squash plants have companions that aid in repelling pests and diseases, giving support, and supplying the plant with shade on the extremely hot days.

Some native American Indians planted squash, beans, and corn together in a mound. Corn, used for supporting the vining squash and beans, is planted in the center of the mound before the other two crops. When the corn is about five inches high, the beans are planted. About one week later squash is planted on the outside of the mound.

This method of gardening is often referred to as the “three sisters”. Each of the three crops benefits the other crops. Here are some of the benefits:

The bright yellow and orange common or French marigold flowers repel harmful bugs such as squash bugs. These beautiful, fragrant flowers also attract beneficial insects like hoverflies. The larvae of hoverflies eat aphids and other insects. The adult hoverfly is also a pollinator.

Another flower that is an effective companion plant to squash is nasturtium. This edible flower, rich in vitamin C, is an attractant to pollinators such as hoverflies. The nasturtium is also known to repel squash bugs and cucumber beetles.

Oregano is an aromatic herb that can repel harmful squash pests. When planting near squash, keep in mind that oregano can spread causing crowding of plants.

Dill is a tall-growing, fragrant herb that attracts beneficial insects such as ladybugs and praying mantises. These insects can reduce the populations of many squash pests. It is a general companion to many plants including the squash plant.