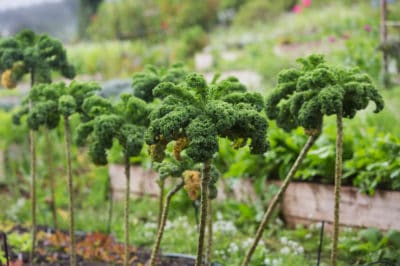 Tree kale is also called tree cabbage, tree collard, walking stick kale, and purple tree kale or purple tree collard. It’s sweeter than collard, and it’s a perennial, a plant that lives for more than two years. It can, rarely, bolt, or produce seed and die off, but if it does, its strong stalk can become a sturdy walking stick, fencing, or other useful items.

Tree Kale and Garden Kale – the Same but Different

If you want to grow tree kale, forget most of what you know or have heard about growing other types of kale.

While tree kale prefers well-drained soil and full sun to partial shade, like other kales, it tolerates heavy clay soils as well as loamy, sandy ones. It will also grow in acidic soils, although sweetening acidic soils by adding lime does improve growth.

Tree kale also tolerates a wider range of temperatures and climates than other kales, from cool and temperate to humid and tropical. Tree kale is grown along California’s Pacific coast and even in Hawaii. In fact, tree kale reportedly grows better in coastal areas than it does farther inland. In hotter climates, though, both tree kale and garden kale prefer partial shade.

Tree kale rarely bolts, flowering and producing seeds. If it does bolt, it does die off like other kales, but unlike other kales, the seeds don’t grow true to the parent plant. They don’t necessarily produce tree kale.

Tree kale is usually grown from stem-tip cuttings that are at least 4 inches to 6 inches long, but, preferably, they should be between 6 inches and 8 inches long. Three to four trees, or a 6 to 8 foot space, can provide a family with enough kale for an entire year, but you will need extra cuttings because not all of them will take root and survive.

Include as many growth nodes as possible on each cutting, at least six to eight. The growth nodes are the places where leaves are growing or where they have been removed or fallen off.

The cuttings should be taken from kale trees that are between 18 and 24 months old. Cuttings must be taken before the stems begin to become woody, but cuttings taken when the stems are too young, before they measure between 1/2 inch and 1 inch in diameter, are too thin. Cuttings taken too soon simply wilt and die, while those from woody stems fail to form roots and grow.

To keep the cuttings from losing too much water, remove all but the two or three youngest leaves at the very tip of the cutting.

Winter is the best time to make cuttings.

If the flat end of the cutting has had a chance to seal itself before planting, help the cutting absorb water by making a fresh cut about 1 inch from the end, just below a growth node.

Plant your cuttings either in the ground or in a one-gallon nursery container, leaving about one fourth of the cutting above the top of the potting soil mix. At least three growth nodes should be below the soil and at least three should be above the soil.

You also can plant cuttings in large coffee cans or yogurt containers as long as you punch plenty of drainage holes in the bottom.

As with regular kale, garden soil is too heavy for container planting, even when you are starting plants for later transplanting.

Whether you plant your cutting in the ground or in a container, choose a partially shaded location in hotter climates, and keep the cutting well-watered, but avoid overwatering that would cause the cutting to rot. The guidelines for growing regular kale is to keep the soil moist at a depth of one inch but to allow the top layer to dry out between each watering.

You can grow tree kale in a container, but if you plan to transplant your cutting, it should have formed a sufficient root system in four to six weeks. You can wait for up to four months to be certain your cutting is ready to be transplanted. As with garden kale, early spring is the best time for transplanting.

Before transplanting, your tree kale should be at least two leaves growing from each node, and the bottom of the cutting or the nodes below the soil should have 3- or 4-inch long roots. When removing the tree kale from the container, be careful not to break the roots off of the plant.

Because the main stem produces large leaves as long as it is not pruned or topped, it becomes top heavy. Although the stems eventually become woody, the stems and the root systems are not strong enough to support this top heavy growth without assistance, especially in high winds or wet soil.

Planting tree kale next a wall, fastening it to a wall, or staking it to an 8 to 10 foot high tree stake with 2 to 3 feet of the pole buried in the ground provides the support tree kale needs. One stake should be placed about 2 inches away from each tree kale when it is planted. Use the stakes as support for 30 percent tree netting, especially in the summer or in hot climates, until your tree kale has a sufficient number of leaves to thrive. The netting also protects your kale from the insects that can attack both garden and tree kale. You can remove the netting when the weather begins to cool if not before then.

Topping your tree kale at 8 to 10 feet, or even at any height above 5 feet, encourages it to form branches. Once the main stem is topped, the leaves may become smaller. The leaves on the side branches are always smaller ones.

Tree kale can be pruned to slow and strengthen growth, especially when it is spaced for high density harvesting.

The best time for pruning is two to three weeks before summer’s hottest temperatures. This allows your kale time to produce more growth for cool weather harvesting.

After this first pruning of the year, use a border fork to loosen and aerate the soil 3 to 4 inches deep, and then water it well. If needed, cover your tree kale with shade netting to protect it from the heat until the new leaves are 3 to 4 inches long.

One to two months after this pruning, revisit your tree kale and remove any small stems growing below 2 feet to 2 1/2 feet, unless you want your tree kale to spread. If the tips of these lower branches touch the soil, they can take root and send up new shoots the entire length of the stem.

At this time, you should also remove any smaller stems that have emerged above the 2 to 2 1/2 foot height, leaving your three to four strong stems from the first pruning of the year.

Add the stems you remove to your compost.

When harvesting tree kale, keep in mind that the green leaves are not as sweet as the ones with some purple on them.

To pick the leaves, snap them gently but firmly downward as you would with garden kale. Avoid peeling them down the stem.

Harvesting is easier in the morning or evening when temperatures are cooler.

Serve the leaves in salads, soups, and stews; sauté or lightly roast them; or make them into kale chips as you would the leaves of garden kale. You can, however, do something a little different with the larger tree kale leaves. You can use them as wraps for hearty fillings.